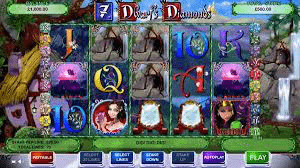 In 7 Dwarfs Diamonds, there is the chance at a prize worth up to 0,000. The Slot comes with 5 reels and 20 paylines along with features such as wild symbols, a bonus games, scatters and free spins.

Focused with its theme on the story of Sleeping Beauty and the 7 dwarves, this slot takes it one step forward and makes them 7 diamond mine workers. It combines the diamond theme with the story and it has all the major characters included. You will find there the magic mirror, the queen, the prince, Sleeping Beauty, various gems and playing cards.

The wagers that you get to make in this slot are on the high side, allowing you to invest up to 0 on a single spin of the reels. The line bet uses a single coin, but its value will go as high as , while the starting value is only . There is a handsome reward offered to the players that get the right five symbol combo on a line, a 10,000x multiple of the line bet. It could mean up to 0,000 in the player’s account, a very good reason to give this slot a chance.

The game has a wild symbol that has on it the image of the queen with the poisoned apple in her hand. It will award the top jackpot if an entire line is occupied by it, while three and four symbol combinations will give the player considerably less.

There are two bonus symbols in the game, the basket of apples and the image of Sleeping Beauty holding a diamond. The presence of at least three apple baskets will result in a round of Free Spins. The green apple, once chosen by the player, will let him know how many rounds he’s won. The lone red apple shows the player the multiplier for those rounds.

The second bonus game, with Sleeping Beauty, will give the player a Bonus game called Diamond Mine Loot. In it, you will see how the dwarves come back home and each one has a sack full of diamonds. A dwarf is chosen by the player and there is a prize that’s hidden inside the sack he carries.

The game both looks good and has huge payouts, so I have no problem recommending it. The features will also give you enough to work with, so chances are that you will not get bored easily.