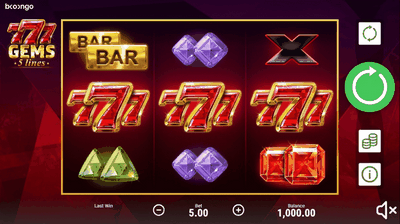 Gems online is a 2019 release from Boongo with up to x150 bet!
Released in February 2019, 777 Gems is a sleek and modern 3-reel and 5 paylines slot from the developer Booongo which offers the chance to collect up to x150 bet!

As we mentioned, the slot has a sleek look with a simple but attractive red background and transparent reels which can hold all sorts of symbols that include lucky sevens, bells and bars towards the high end, and red, orange, green and purple gems towards the low end. The audio effects are standard, arising from the clicking sound of the reels spinning, a payline win or a triggered feature. Noticeably absent from the slot is any sort of music which we think would not have hurt.

This is a classic 3-reel slot with a sleek design.

This slot can probably be accused of not being very feature heavy. A notable feature that it does have however is the x2 multiplier which is applied in scenarios where the 3×3 grid is covered in an identical symbol. As you can imagine this is difficult to do, meaning you may find it difficult to take advantage of it most of the time.

Features a x2 multiplier applied when all three reels are stacked with the same symbol.

Gems mobile slot a return to player (RTP) of 96. Like many modern day slots, this game is designed to be played on several platforms that can include mobile, tablet and desktop. If you’re playing the game while on the move, then you’ll need a strong Wi-Fi connection along with a device that operates using Android or iOS.

To truly appreciate this game, you must be a fan of the 3-reel classics. Given that this is a five paylines slot, creating winning paylines is not always easy and so the absence of certain features such as wilds are sorely missed. Let’s face it, features also make slots more exciting! That being said, there are some good prizes to be had here which undoubtedly also makes slots more exciting. If you think that you might be interested, then you can visit one of our recommended casinos to try the slot for free.