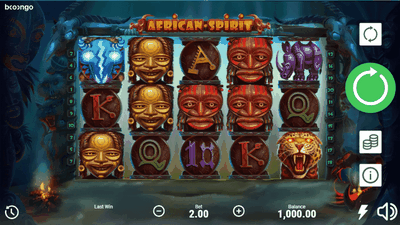 Boongo invites you to sit by the crackling fire on the dark savannah as they present the African themed 5-reel, 3-row and 20 fixed paylines slot African Spirit. The game incorporates African animals and tribal artefacts with the chance to win upwards of 1,000 coins on a fixed payline!
Dark and mysterious tone

The slot has a dark and mysterious tone with a setting that incorporates the image of tribal masks and the heads of various animals along the edge of the reels. There is also the ominous skull of an antelope. The bases symbols are brilliant and include a red African face carving, yellow face carving, a purple rhino carving and a monkey. The lower paying symbols include the A, K, Q, J and 10 poker icons. The music is African themed and much more upbeat. Included in the audio effects is the sound of crickets, crackling of fire amongst others.

The slot has a number of feature symbols that can appear randomly during a spin. The first is the spotted cheetah wild that can substitute for any other symbol when it appears on the 2nd, 3rd, 4th or 5th reels. During the main game you can land between 4 and 8 wilds. The game also includes a burning spear symbol appearing on the 5th reel only and unlocks respins when appearing on the same row with wilds.

During this respin feature, the spotted cheetah wild will expand to cover all spaces of a reel. Also incorporated in the slot is the blue mask scatter symbol which will trigger free spins when 3 appear on the 1st, 3rd and 5th reels. The number of free spins varies from between 6 and 10 rounds. Before setting the feature in motion you need to choose one of the vases presented with the bonuses for the free spins. They could include respins, 2x multipliers, 3x multipliers, random wilds ranging from 4 to 7 on the 2nd to 5th reels, expanded wilds from 1 to 3 and money rewards of 20 total bets.

African African Spirit slot games be played with stakes that range from €0. With 20 paylines you have the chance to combine wins across multiple paylines for better rewards. Payline wins are calculated by taking the number of coins that are illustrated on the paytable and multiplying them by the bet per payline. The African theme is not an uncommon one to the video slots world and this slot is supported by some decent graphics and audio and coupled with some of the more common features. You can visit the casino today if you’re ready to get started but if you’re not quite sure you can also try it for free.