Age Of The Gods Furious 4 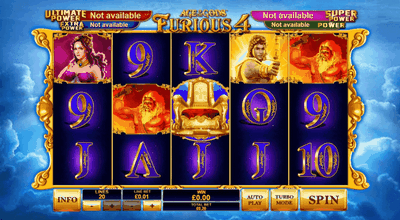 With five reels and 20 paylines to play, this slot has a range of staking options and bonus features. Part of the Playtech Age of the Gods series, this beautiful game also features the opportunity to land one of four progressive jackpots. This feature will be familiar to lovers of Playtech DC Comics slots such as Superman the Movie and other games in the Age of Gods series.
With an atmospheric soundtrack, user-friendly interface and turbo mode for those who want to play the game in a hurry, this is a premium slot experience that delivers rich rewards if the gods smile on you.

Played on five gold-edged reels set somewhere in the clouds, Age of Gods: Furious 4 looks gorgeous. Even the standard card symbols are given a mystical overhaul and set against a star-filled night sky.

The furious four are represented in a stylised way that makes them pop from the reels: Atlas, the legendary Titan, holding the world on his shoulder
Pandora, whose curiosity unleashed all the evils of the world from the box she holds
Apollo, the god of archery with his bow and arrow
Hephaestus, the god of blacksmiths and fire, wielding his hammer.

The soundtrack adds hugely to the immersive atmosphere in this slot and really ramps up the tension as you spin. This is a beautifully put-together slot where the aesthetics have been really well considered and there is nothing out of place – even the card symbols make a sort of sense in their design.

How to play Age of Gods: Furious 4 slots

This is a five-reel, 20-payline slot in which you can choose to play from one to 20 paylines for stakes as low as 0. As a progressive jackpot slot, the higher your stake, the more likely you are to trigger the jackpot feature. With all wins paid in multipliers, the bigger you line bet, the richer the reward when you land a winning combination of three or more symbols on a winning payline.

Line bets increase from 0. Remember that you can choose to play a single payline, so this slot could cost you as little as 0. This makes Age of Gods: Furious 4 an attractive game for all styles of play.

Age of Gods: Furious 4 has a relatively low RTP of 93.
We think this is reasonably consistent, with this medium to high volatility slot leaving us biting our nails a couple of times before the big bonus features landed.

Whether you prefer low or high volatility games will depend on how much you like to risk for your reward. Low volatility games deliver a steady stream of smaller wins, making for a leisurely session at the reels. High volatility slots are edge-of-the-seat stuff where you will watch your bankroll dwindle until a high reward bonus feature hits. Obviously, the adrenaline rush and the high payouts make these slots ideal for those with a bigger bankroll, but whether you can take the tension is up to you!

How to win at Age of Gods: Furious 4

As with any other slot, winning in Age of Gods: Furious 4 depends on creating winning combinations of between three and five symbols on an active payline. In this game, the highest paying symbol is the golden wild. This rewards the lucky mortal with a 10,000x multiplier.

As this is a medium to high volatility slot, you will probably hit the high-paying bonus feature two or three times in the course of 150-200 spins. Here the rewards on offer are directly affected by the bonus features you pick up. Trigger the Ultimate Power progressive jackpot and you could earn 250,000 coins or more – a truly life-changing sum.

One word of advice – this kind of slot demands that you keep your nerve, as you will hit a few dry spells when rewards are few. If you have hit your playing limit for the day, be prepared to walk away and try again tomorrow.

This Playtech slot is packed with bonus features that revolve around the characters that appear in the centre of the reels. The main appeal in this Age of Gods slot is the free spins that are triggered by landing three or more throne of the gods scatters anywhere on the reels. You will receive 12 free spins but it is the additional features you can benefit from when one of the four characters covers reel three that make this an extremely lucrative bonus.

The four Furious ‘Age of…’ features work as follows:

Age of Light: When Apollo covers the centre reel, he delivers four free spins. Any Apollo symbols act as expanding wilds and cover the entire reel, staying in place until the feature is over.

Age of Curiosity: Pandora brings with her four free spins and an increasing multiplier every time she appears on the reels. Any wins during these four spins will be boosted by your Pandora multiplier.

Age of Fire: If Hephaestus appears on reel three, you will be gifted four free spins. Hephaestus expands to cover reel one and locks in place throughout the next four spins. Any other Hephaestus icons will also lock in place to boost your chances of creating winning combinations.

Age of Endurance: Atlas will grant you three free spins and substitutes for all other symbols except the wild and scatter. The extra Atlas wilds freeze on the reels for the duration of the feature.

If you thought it couldn’t get any better, it can – once a feature has run its course, another can be triggered if any of the furious four cover the entirety of the central reel
Curiosity feature and then trigger the Endurance feature, as we did, for a very lucrative payout.

There are plenty of ways to win playing Age of Gods: Furious 4. The highest-paying paytable symbol is Apollo, who carries a 2,000x multiplier for five in a line. You will need to look to the special symbols for the biggest available payout in base gameplay, with the golden wild offering a 10,000x multiplier reward.

There are also four progressive Playtech Jackpots – from Power to Ultimate Power – that can significantly improve your winnings with a potentially life-changing sum into six figures.

There are some huge rewards available when you play Age of Gods: Furious 4 that make casino play extremely appealing. This game will be available to play in any online casino featuring Playtech slots – check out our reviews to find the casinos the Slots Temple team thinks are worth signing up for.

Several types of welcome bonuses are available when you play for real money, usually including free spins worth 10p or 20p a time. You are not likely to make your fortune but they are a useful way of trying out playing slots for money.
otherwise, you will be offered a matched deposit bonus whereby the casino matches the deposit you make up to a certain limit.

We always recommend reading the terms and conditions attached to any bonuses, as they will give you clear information about any withdrawal limits and wagering requirements. In this way, you won’t be disappointed if you can’t withdraw all your winnings on Age of Gods: Furious 4 or have to play through that £10 win at least 20 times before adding it to your bankroll.

Age of Gods: Furious 4 on mobile

As with all Playtech slots, Age of Gods: Furious 4 is optimised for HTML5 for a super-smooth mobile experience. This means you can play all the Age of Gods slots on mobile and tablet without needing to download software and lose mobile storage. You can play in seconds without a serious impact on battery life, which is always good news when you fancy a slots session on the move.

At Slots Temple we take the time to thoroughly test and review every one of our thousands of slots so that you know exactly what you will be playing every time you select one of our games. If you find you love this Age of Gods slots, we make it easy for you to search for other games in the series or other slots by Playtech. Search by theme and developer and use our in-depth free play reviews to get the most out of your slots experience.

Why should you play Age of Gods: Furious 4? Apart from the smooth gameplay, beautiful visuals and stirring soundtrack, this is a game with a wealth of bonus features ready to make you feel like a Greek god. There are four on offer, based on the four main characters in the game. Spin three thrones of the gods to earn 12 free games in which Pandora, Hephaestus, Apollo and Atlas all guide you through their ages with extra free spins, multipliers and sticky wilds. During our 150-spin experience, we hit this feature three times, earning a highest payout of 1,871 credits through a combination of Pandora Age of Curiosity spins with the Atlas Age of Endurance feature. After a few dry spells, we were able to walk away with 1,372 credits from a generous starting point of 1,000 credits.

We found the gameplay slick and fast-moving and we liked the option to turn on turboplay if you need to spin and win in a hurry. All in all, this is another brilliant entry in the Playtech Age of Gods series.

With a 3,000x multiplier win in base gameplay and the stunning graphics that characterise this series, you will enjoy free spins and sticky wilds plus four randomly activated progressive jackpots.

This Red Tiger Gaming slot features a Magical Symbols swap to boost your chance of unlocking the 1,000-credit jackpot. The Rainbow Jackpots RTP of 95 per cent makes this worth a spin.

IGT has done away with the progressive jackpot here
Pyramid bonus round.

Realtime Gaming take you back to the Age of Emperors with this progressive jackpot slot. If you love old-school slots with free spins and multipliers, you will love this Roman-themed slot.

Is Age of Gods: Furious 4 a must-play?

Playtech is renowned for creating superbly playable slots with great features and the potential to land life-changing jackpots. From the aesthetics and the soundtrack to the fast-paced and bonus feature-filled gameplay, this slot has a way of enriching mere mortals who are brave enough to play with the gods.

Disclaimer: Age of the Gods Furious 4 trademark / license is owned by Playtech.