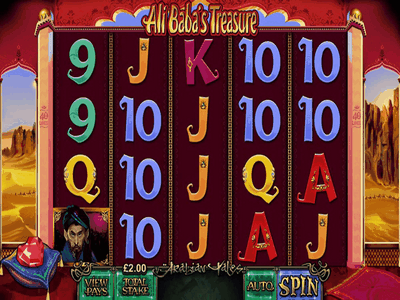 Ali Baba ’s Treasure is another online video slot from Cayetano Gaming. It is one of their series of Arabian Tales games, and we also recently played Aladdin’s Lamp which is from the same software developer. This five reel, forty pay-line slot loads to the image of a rather delicious looking, semi-clad dancing girl, and offers a top in game prize of 1000 coins, but not only that, there are loads of ways to win loot.
Special Features

The Arabian theme is strong in this online video slot which presents with an array of icons including Ali Baba of course, and a stacked wild that is awarded when a heart-shaped ruby bursts, and substitutes for all other paying symbols. The Arabian Tales icon is made use of again on reels 1, 3, and five, which awards free spins, or may trigger a bonus game.

Ali Baba is the other Random Wild icon, which may also triggers the free spins feature where after every non-winning free spin, stays on the reels to turn more and more icons in Wild symbols. Other symbols are a rather evil looking thief (? Ace, King, Queen, Jack, ten and nine.

Pay lines are fixed at 40, and this may not be changed by the player, which makes for a minimum bet of 0. Auto-play my be set at between 5 and 25 for players who would like to continue playing after they have left the room. Ambient sounds and music are Middle Easter, which helps to keeps us in theme, however this can be switched off if the player desires.

A nice bonus feature known as the “Sesame Cave” is triggered by Ali Baba’s wild, or alternately the free spins scatter. Enter by uttering the words “open Sesame” (just kidding), and pick your own treasure by choosing a winning multiplier. Once again this writer was able to enter the bonus game which opens up into a different screen, showing the door of a cave. Click “Start” and the cave door opens to the scene showing three tunnels. Each tunnel offers a different multiplier which then leads into the treasure room. Click on the treasure to take your pick of the loot, and different amounts are awarded until we click on “collect”. It is really a fun game to play.