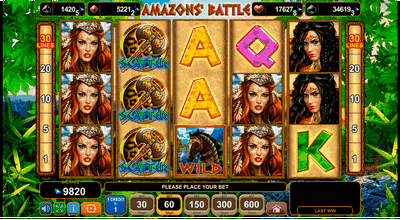 The Amazons were a race of warrior women from early Greek myths. They first appear in some versions of the Iliad, arriving after Hector’s death to fight on Troy’s side. Amazon’s battle turns them into tattooed axe-wielding hotties. With a pet tiger and on-point feathering in their haircuts.

The version has some of the pre-historic fantasy setting that Greek myth evokes but filtered through the aesthetic of 90s television. Amazons’ Battle is Troy for the Generation Xena.

Amazon’s Battle’s graphics don’t break much in the way of new ground. But they are decent looking. The artwork is well wrought and the symbols clear and fun. The variety of Amazons and their pet tiger make for a pleasant visual landscape, and the jungle backdrop is pleasant.

The animations are very simple, as are the win and spin sounds. There’s no background music to speak of, except for a quick sting when the player hits a winning combo.

But the sound effects match the animations and are good enough, if rather short on that vital sense of atmosphere that draws one into a slot machine.

With thirty win lines on the five reel, three row slot, there are plenty of ways to win. Especially with the stacked symbols on each reel.

Players looking to ramp up the volatility can do so with a gamble feature. A simple red or black choice, with a double or nothing bet.

The gameplay might be a little basic but there’s also a free spin bonus and randomly triggered jackpot that give the player something to chase after.

The Scatter appears on reels two, three, and four. If the player hits seven or more Scatters on one spin, they win twice their bet and a free spin bonus.

Seven Scatters get the player seven free spins, eight gets them fourteen, nine gets them thirty.

The slot is also connected up with the EGT jackpot system which pools four progressive jackpots. Each pot is named for the suit of a card. When the jackpot is triggered (at random, at the end of a spin), the player is dealt twelve cards. They turn the cards over one at a time and the first suit they get three of is the jackpot they are awarded.

The higher the stakes the player is playing, the more likely the jackpot is to trigger. In this way, the RTP remains the same despite the difference in the ratio between varied bet sizes and absolute jackpot sizes.

Sometimes a high RTP can make up for this, but Amazon’s Battle just isn’t high enough in either department.

Players looking for a thrill might want to give this one a skip. The RTP isn’t bad, but the volatility just isn’t high enough to work with our preferred strategies.

For anyone making their own way, who isn’t too bothered by the volatility, this is a decent slot with a nice theme, some solid graphics, but rather short on atmosphere.

Overall, this is a good slot, but not one that we can recommend very highly.