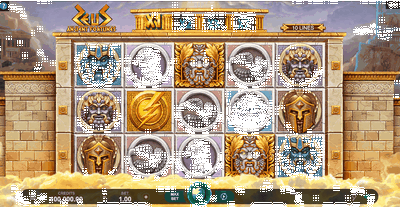 Mount Olympus lies in wait for your visit. Show the gods respect by paying your way in wagers, and witness the returns they honour you with. Zeus and his underlings seek to show favour on all those who would approach the throne in a worthy manner. Know that you have hit the mark when Zeus awards rolling reels with a high multiplier, or activates the Free Spins round! This game holds up to 1,000 times your line stake and offers a 21x multiplier in the free games, and a potential 70 free spins in the vault, just waiting to be won.

Theme and Background of Ancient Fortunes

Ancient Fortunes: Zeus is an online slot game with a Greek Mythology theme. The scene is set at Mount Olympus before the pantheon of gods. The reels set is placed as a gate, separating you from the throne room of Zeus. Each time the reels tumble, you will catch the majesty of the holy mountain in the background.

The visuals are immaculate, boasting gorgeous colours and details. The pastel shades used in the graphics accentuate the finer details perfectly. The rumbling drums in the background provide a sense of awe on the reels, while the thunderous drop of the reel tiles on each spin aptly fits the might and ferocity of the god of thunder! Zeus’s authoritative voice booms across the game as he commentates on BIG wins and multiplier wins.

The symbols on the wall represent the reels. Here a variety of symbols display some Greek gods and other mystical creatures of the era. The lower paying symbols include a panther, a vulture, and the kraken, while the higher paying symbols all represent some of the more well-known deities, namely: Dionysus, Poseidon, Hermes, and Aries.

Zeus, himself, is the Wild symbol in the game and can take the place of any standard game symbol in order to complete a winning combination. Catching a glimpse of him on the reels is a sight worth celebrating, as it means that the potential for wins is there. The scatter symbol in the game is Zeus’ lightning bolt. This icon is critical in triggering the game’s main feature.

This slot game is played over a standard 5-reel, 3-row format, with 10 fixed paylines. The game is set on a rolling reel engine. This engine allows for frequent re-spins of the reels after wins, but more on this later.

Start playing by adjusting your wager up or down with the left and right arrows on the interface. You can set a bet for between €0. Make use of the MAX BET toggle to set the wager to its highest possible denomination. Once the bet is in place, you can spin the reels to see what the rollers have to offer in the way of winning combinations. Bear in mind that winning combos can be landed, paying from left to right and right to left.

The gaming interface also allows for an Auto Spin function. Simply set the machine to the desired number of spins and the game will roll the reels for you without you having to lift another figure. This is a fabulous tool for those playing more than one casino game at a time.

This slot game is geared for success, offering a decent 96. The medium variance of the game ensures a mixed bag of wins. Smaller wins will come around more frequently, but bigger wins will circle around here and there as well.

What would a slot about almighty gods be, without a serious selection of special features available in the game?

Rolling reels is just another nifty name for what we all know as cascading reels. Each time a winning combination is formed, the symbols involved in the win will disappear from the reels and cause other tiles to fall down in place to fill the gaps. This essentially provides another opportunity for a win to be allocated. Stringing together several cascades on a single spin will see the multiplier increase with each new cascade, climbing from 1x to 2x, 3x, and even as high as 7x!

The rolling reel feature stays intact for the free spin round, however the win multipliers are boosted this time to an amazing 3x, 7x, 11x, and ultimately 21x!

A Final Word on Ancient Fortunes

If ancient mythology is something that you are a fan of, then this superb slot game cannot be overlooked. The sensory experience is truly amazing. Combine this with some great game features and you have a well-rounded slot. The game is very similar to Gonzo’s Quest by NetEnt, both in styling and game appeal.