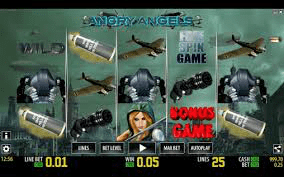 The steampunk ambiance of Angry Angels online slot a guarantee for big wins. This Multi-line Slot revisits the Victorian Era in a post-apocalyptic scenario, with detailed and realistic graphics, themed music and stunning sound effects.

WILD: it is a wildcard symbol that allows the player to get the highest payout among those compatible with the symbols drawn in other reels of the same bet line (except the maximum winning obtainable with the highest bet level). In this way the wildcard is combined with other symbols to get a winning, as it can replace all symbols except the Bonus Game, Bonus Spin Game and the Magic Spin.

BONUS GAME: in case of specified number of Bonus Game symbols (according to the paytable) on an active bet line, the player wins one special free game that will allow to obtain further winnings. Only one Bonus Game is awarded per spin.
FREE SPIN GAME: in case of specified number of Free Spin Game symbols (according to the paytable) present on the matrix, the player wins the admission to the Free Spin Game in which it’s possible to get any additional free spins during which winnings are multiplied by the coefficient shown in the paytable. Won free spins are played with the same bet level and the same number of lines of the round that activated the Free Spins Game.