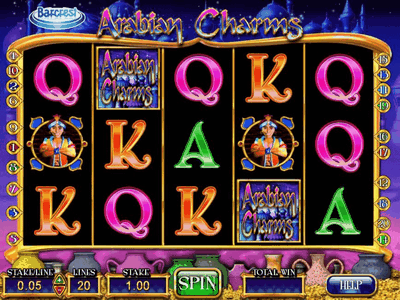 Setup and Play for Arabian Charms

The layout of this game exists in the form of a five reel and three row design. This should come as nothing unique to regular gamers, as it’s a fairly standard display for such games. Barcrest have also made sure to include a total of 20 different pay lines as well. This particular feature is not something you are able to change. However, all players do have the chance to switch around the wager that they place per spin. This is done by using the relevant plus and minus buttons at the bottom of the screen under the ‘Stake/Line’ heading. With this, you can change your wager between its minimum of . This means that if you push it up to its highest level, your maximum coin bet stands at 0 per round.

Looking at the game’s visual side, you’ll find that it features some strong, high quality graphics. The background contains some Arabian buildings set against a dark night sky. Then, you’ll find that the reels contain multiple different symbols. These start with the standard A, K and Q icons, but they’re joined by more thematically relevant offerings too. To begin with, there’s the symbol of the vicious snake in a basket. After this, you’ll find an icon of the genie, who seems to have gotten loose from his lamp already. The final standard symbol is the Arabian Charms slot machine logo. If you bring five of these on to a winning pay line, you’ll receive a maximum pay out of 250 times your bet. The remaining icons in the game make up its special feature offerings.

Barcrest can be very hit or miss when it comes to special features in its games. However, Arabian Charms manages to feature some great bonus rounds and icons. Of course, to begin with, there’s the wild symbol. This is the shot of the Arabian city. As a wild, it will stand in for any other icon on the reels in order to form a winning combination. This doesn’t apply to bonus icons and if five wilds are present on a winning pay line, you’ll receive a multiplier of times 250.

However, the wild is not the only symbol that provides speciality features. Instead, there’s also the bonus icon. This works as a scatter, so it will provide pay outs and rewards regardless of the location it appears in. If three of the bonus symbols come into view on reels two, three and four, the Golden Trail Bonus activates. With this, you need to press the ‘Start’ button in order to spin the wheel. This decides the number of steps that you will move up the Cash Path. You can continue spinning and progressing up the steps until the wheel lands on a ‘Collect’ position. Alternatively, if you achieve the top prize, the pay out is given and the round ends. If you spin the genie into view on the steps wheel, you’ll receive a Trail Upgrade. The maximum reward you can win in this round is 500 times your total wager.

Furthermore, every spin that you make of the reels provides you with a chance to activate the Arabian Charms mobile slot Mystery Win. If this does happen, either a winning set of symbols will come into view where the result of the last spin was a lost. Or, if it was a winning spin, the win amount will be improved upon. This is a great addition to the slot.

If you like the features of this online slot, we can suggest some similarities to Arabian Charms. To begin with, you might want to try out Haunted House from Playtech. This provides the same kind of layout – five reels, three rows and 20 pay lines. Wilds can appear on all reels in both games and there’s a single bonus feature in each as well. Another exact match is the other Playtech offering of Beach Life. In fact, there are multiple online games which provide you with pretty much the exact same features as Arabian Charms. Cryptologic provides the game Captain Nemo, while Gamesys offers up Big Top Tombola.