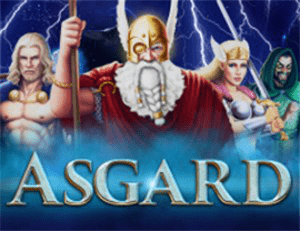 Join Odin, Thor, Loki and Freyja in Asgard, a North myth and legend-themed slot from Pragmatic Play. This 5 reel, 25 payline slot comes with 4 random modifiers that deliver wild reels, added wilds, transforming symbols and royal values that turn wild. There are also 4 free spins rounds complete with added extras. Play on your desktop, tablet or mobile from between 25p and £125 per spin.
Pragmatic Play has created a good-looking slot here. There’s a cartoon feel to the reels which are set against lightning-filled skies, snow-capped mountains and raging waterfalls. You’ll see lower value A to 10 royal values alongside Freyja, Loki, Thor and Odin. The latter is the top payer, awarding 10 times your stake if you land 5 on a line.

The Asgard casino app symbol is the wild. It replaces everything bar the bonus and offers awards of up to 20 times your total stake per payline. On any given base game spin, you could land 1 of 4 random bonus features. These are associated with 1 of the 4 gods.

Thor feature – all lower value royal symbols on show at the end of a spin morph into wilds and a new payout consideration is made.
Loki feature – stacks of Loki’s special symbol can land here. They all transform into the same matching symbol and a new payout follows.
Freyja feature – 3, 4 or 5 extra wilds are added to random positions on the reels.
Odin feature – stacks of wild reels are added here. You could land multiple stacked wilds here if you get really lucky.

Land the bonus symbol (the silver mask) on reels 2, 3 and 4 on the same spin and you’ll trigger the Free Spins feature. You’ll then be randomly allocated 1 of 4 free spin rounds. In all cases, you’ll receive 5 free spins. On each of them, you’ll receive 1 of the modifier extras associated with the Norse gods above.

We enjoyed Pragmatic Play’s take on the Norse theme. The visuals are well crafted and the sweeping orchestral is an ideal match. Expect plenty of action here too as the random extras hit regularly. We found the Free Spins feature harder to come by but enjoyed some decent success when they did.

Norse myth and legend has grown in popularity as a slot theme. The results have been mixed. With it design flair and steady supply of extras, Asgard mobile slot is certainly among the better examples of this genre. I also recommend you try Viking Gods: Thor & Loki by Playson as well as Legend of Loki by iSoftBet.