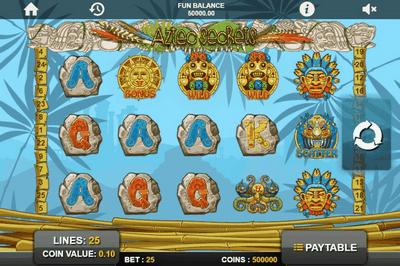 The Aztec empire was filled with secrets, which probably explains why it has represented tremendous inspiration for online casino software developers. Almost every manufacturer has created an online slots machine that promises to unveil the secrets of the Mesoamerican civilisation, but few have actually managed to hit the mark.
That is until Amatic took up the charge, with the developer bringing its fun nature to the slots sub-genre in new release, Aztec Secret.

The Aztec Secret video slot is the latest offering from Amatic, and the 5 reels and 10 paylines offer up some generic slots action on the surface if we’re being honest. Even so, it does at least come through on the promise to reveal the secrets of the Aztecs through Scatter symbols and Wild symbols that unlock free spins.

From a visual standpoint, Aztec Secret is hardly the most innovative game we’ve crossed paths with as of late. However, the game does feature some nicely designed icons and plenty of exotic colours. The game also comes complete with flashy animations that play when winning combinations are landed. Creating a winning combination with the chief icon for example causes the character to don a sacred golden mask, enhancing the mystery.

In terms of the games audio, it comes with the standard Mesoamerican panpipe music designed to pull players into the Aztec world. Image for image, the UI of Aztec Secret is solid, but not quite spectacular.

Aztec Secret offers 10 fixed paylines, but players are still given lots of control over their bets. This online slots game offers a wealth of wagering options between 1 and 500 coins. However, this is certainly one for the high rollers thanks to a 5,000 credit maximum bet.

It doesn’t matter how much you bet, however, as the line bet multipliers don’t change, offering up multiples of your line bet whenever you match up two or more of the same symbol. Looking at the game’s payout, the lowest prize is 3x for finding three 10s on the reels, while punters can scoop up a whopping 2,500x if five chiefs appear on one of the 10 fixed paylines.

This real money online slots game comes with one special bonus icon
This bonus symbol has two special functions, serving as both a Wild symbol that completes winning combinations, while also offering bet multipliers as a Scatter symbol.

It offers prizes of 2x, 20x, or 250x your bet for three, four, or five appearing respectively. The bonus features don’t stop there either, as this slot machine has one more hidden secret. If you land three scattered Wild symbols, then you’ll get 5 free spins. Before each spin, one symbol from the paytable is randomly selected to become an expanding symbol that covers an entire reel, offering up plenty of chances for big wins.

If you’re not satisfied by the size of any of your wins, then you can use a gamble game to potentially boost your winnings. Gamblers are given the chance to double or even quadruple their winnings by guessing the colour or suit of a playing card.

Climbing up the Platinum Pyramid

It can be a little difficult to put your finger on similar games to Aztec Secret. The theme is common enough, but it can be difficult to find one that matches it in gameplay. This isn’t enough to deter our team however, as we’ve found some games we feel you’ll enjoy if you want more of the same. Aztec Treasure by Betsoft and Platinum Pyramid by Amaya are similar enough to Aztec Secret to whet your appetite.

There’s no denying that the free Aztec Secret slot is just the latest slot machine looking to draw on the Aztec Empire as a theme. It’s also true that other games are able to do so much more with the theme. Even so, this Amatic slot release offers up some pretty sizeable wins thanks to a 5,000 coin max bet, and a truly staggering 1,250,000-coin jackpot!