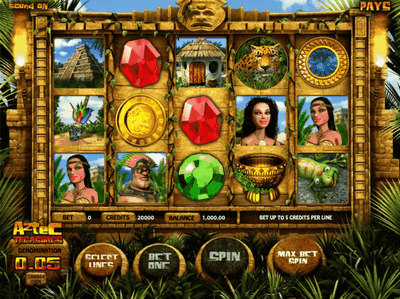 Aztec Treasures slot is an amazing online slots game with a 3×3 design and 30 paylines. It’s powered by Betsoft software. Betsoft is known in the industry for offering some of the best 3D graphics to be found online. Aztec Treasure’s obvious Aztec theme is a big hit with many slots players. It also has animations that help it to stand out from other games. This game offers a progressive jackpot that grows with each bet placed on the game over the network.
This article will go over the basic design of Aztec Treasures, as well as the coin sizes, the jackpots, the bonus rounds and other features it has to offer. From the intro to the animations and bonus rounds, this game has a lot of features that Betsoft can be proud of.

How to Play the Aztec Treasures Slot

This game can be played on many platforms and it doesn’t require a download. This makes it easy to play from any computer. Pressing the select lines button will cause the paylines to light up, indicating which ones are now active. Once the chosen number of paylines have been activated, players want to click on the bet one button. This will cause the activated paylines to change from 0 all the way up to 5, depending on how much they want to wager.

If the player wants to place the max bet, they can do so easily by simply clicking on the bet max button. They can change the coin size by clicking on the change coin square depicting the current coin size. Finally, they will click the spin button to set the reels in motion.

Aztec Treasures slot review has a 3×3 design in which all the symbols move separate from the others. The denominations on the game start at .

The Aztec drawing symbol will pay out 1x, the feather crown pays out 3x, the bird symbol pays out 5x, the green skull pays out 10x, the feather headband pays out 20x, the pyramid pays out 50x, the Aztec warrior pays out 100x and the Aztec Treasure game logo will payout the progressive jackpot. Players want to keep in mind that in order for them to be eligible to win the progressive jackpot on this game, they need to have placed the max bet for that spin.

One great feature Aztec Treasures has is the option to hold up to two of the reels at the end of a spin. The remaining reels will spin, coming to a stop next to the ones that the player decided to hold on to. This can increase the chance of the player winning if they held on to double symbols, as they only need one more to come up.

Getting three huts on the symbols will trigger a fun little bonus round. In this feature, the player has the chance to pick gifts to give to two women who will go into the hut with the Chief.

Collecting three gems will trigger the gemstone bonus feature. In this feature, the player will choose which holes to put gemstones into. When the gem is put into the hole, a secret room will be revealed, along with the prizes the player won. This feature is triggered in a very creative way. When the reels come to a stop, there is the chance that a gem will appear in the upper right corner of the game. If one does, the tribal man will come on the screen, shoot it off the reels and collect it. Once the player has gathered three gemstones including a red, blue and yellow then the bonus will start.

There is also an instant win bonus players get to enjoy when they get three of the calendar symbols on an active payline. In this feature, players will select a calendar in order to receive an instant prize.

Aztec Treasures slot machine is a well-rounded game. It has a good design, plenty of features to look forward to and it’s accommodating to budgets of different sizes. The feature that came up the most for me when I played the game was the gemstone feature. It seemed like that tribesman was running across the screen after almost every other spin to collect gemstones.

Aztec Treasures is one game I would suggest anyone give a try, even if they generally like the 5 reel setup. This game may have a more basic look at first glance, but in no time at all, players will see that it has a whole lot in store for them.