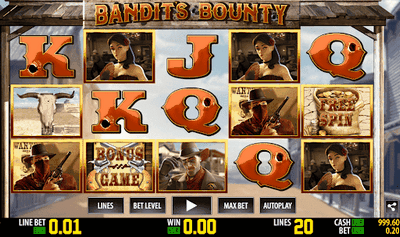 The bet sizes available in Bounty Raid range from 10p to £20.

Bandits are scatter symbols with listed rewards, although they only pay when a Sheriff or Bounty Hunter lands on the same spin.

Several Bandits can land on the same spin.

The Sheriff symbol is non-paying, and with the exception of the middle reel it can land on any reel.

It will activate all currently visible Bandits on the slot, therefore awarding their combined prizes.

At any time, no more than one Sheriff can appear.

This non-paying 1×2 sized scatter symbol can only be displayed in the middle reel, and when it does so it will lock all Bandits on the reels for a Respin feature.

During the Respin, only Bandits and the Golden Coin can land on the reels.

You can re-trigger the feature if new Bandits or a Golden Coin appear in the Respin.

When no new Bandits or Golden Coins have landed, you receive the combined prize of all Bandits.

At any time, only one Bounty Hunter may be shown.

This scatter symbol will only be active during the Respin feature.

When this symbol lands, the prize of all currently visible bandits on the reels is increased.

For all the details about the various jackpots on offer in these games, head to our Daily Double Jackpots hub.