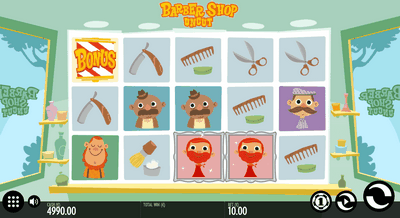 As a big baldie, I don’t often get down to the barber shop. In fact, I’m relatively sure that I’ve had bathroom sessions that have lasted longer than some of my haircuts. Still, Thunderkick Gaming is trying to put you in the seat with a chance to lop off your locks with their Barber Shop Uncut casino slots. The game has a very cute look and allows you to pick up some prizes in a way that a barber’s broom picks up cut hair.

Barber Shop Uncut is a 5 reel, 40 payline video slot that is based in a local barbershop, complete with the shelving look that has different creams and shampoos in place. The game’s symbols are a combination of different barber related tools as well as characters. These symbols include a comb, lathering foam and brush, scissors, razor, bald man with a moustache, ginger with a beard, man in purple with handlebar mustache, a red-haired man with a huge beard, and a blonde man with long moustache.

The game’s design is built around the re-spin feature, which sees symbols that trigger a win held while the other symbols are re-spun. This continues until either the reels are filled up or no other winning combinations are made. The game also has a free spins bonus round, which comes up when you end up getting enough bonus symbols to pop up on the reels. This feature ends with a spin until you win feature, which lets you keep going with the free spins round until you set off one final win. These features are simplistic, but they combine to give the game a high return to player percentage (RTP) of 97%, which is at the upper end of things that you’d expect to see from an online slot machine.

I found Barber Shop Uncut slot review to be an absolute joy to play. The simplistic artwork still is stunning, and it plays equally well on your desktop or your mobile device, which Thunderkick does a good job of developing its games with. If you like games that you don’t have to take too seriously, then this is an excellent choice. You’re going to end up seeing a bunch of re-spins that bring you some big wins, and even though the glitzy bonus rounds may be missing, this is still a game that’s well worth your time and money.