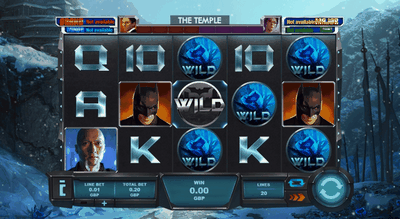 Batman is one of the most iconic comic book characters. There are countless comic book versions of the vigilante and hero of Gotham, as well as movies. But probably the best Batman movies started with the 2005 Batman Begins movie, starring Christian Bale as Batman, Katie Holmes and Michael Caine. Now, Playtech has decided to bring that awesome movie to the reels. The Batman Begins online slot is one of the many DC Comics-themed, branded slots the developer has in its portfolio. With a 95. RTP, medium variance and highly engaging gameplay that could take you to some decent payouts, in addition to four progressive jackpot prizes, Batman Begins slot review by Playtech is a slot that you cannot miss.

You can load the game on any device, mobile or desktop, and you can play it for some really affordable bets. The 5-stage gameplay which features wilds and multipliers will keep you engaged for a long time, so before you sit back, relax and dig in, make sure you go through our Batman Begins review to figure how to play through the special features.

No matter whether you decide to play Batman Begins slot machine on your Android or iOS mobile device, or you’d prefer playing it on your computer, you should know that you will get the same settings for configuring the bets and entering the paytable.

You will notice the little “i” letter on the left bottom corner below the reels, which is your entrance to the paytable. Right next to it, you will see the line bet and total bet amounts, which can be increased or decreased on the plus and minus buttons. The minimum total bet per line is 0. For the 20 paylines offered in the slot, it means that you could bet from 0. Now, in the centre below the reels, you will see the win display. On its right, you see the number of lines display and the autoplay and turbo options next to the spin button.

Moving on to the paytable, you will see the metallic steel playing card symbols from 9 through A, each giving you from 20 to 70 coins for 5-of-a-kind combos. Bruce Wayne gives you 100 coins for the best combo, Jim Gordon 200, and the Scarecrow 300 coins. Dr Jonathan Crane will give you 500 coins, while Ra’s Al Ghul 700 coins. Batman is the highest-paying symbol, giving you 1,000 credits for a 5-of-a-kind combo.

There are 3 wilds in the slot, which substitute for all other symbols in the creation of winning combos. There is a regular wild, an expanded one and a special wild. The regular wild is the Gotham silhouette with Batman’s logo on it. It can appear during any stage. The Batman symbol is the expanding wild, also appearing in any stage. When it lands on the hotspot, which is the middle position on the middle reel, it will expand to cover the whole reel. There is a different special wild for each stage, the flower, the microwave, the petrol, the Bat-signal and the batmobile wild.

Now let’s explain the stages. In addition to the hotspot, there are two meters above the reels that need to be filled in order to get to the corresponding stage. When Ra’s Al Ghul appears on the hotspot to fill the meter in the monorail, you trigger the temple stage that comes with the flower wild. These wilds can expand 1 reel position in 4 diagonal directions. When you land a Bruce Wayne symbol on the hotspot, 1 bar is added to the left meter and when you land Dr Crane 1 bar is added to the right meter. Whichever meter you fill you transition to a new stage.

If you land the Bruce Wayne symbol in the hotspot and fill either the batcave or the temple meter, you get to the Wayne Manor stage. Petrol wilds will be present here that will duplicate 2 to 5 adjacent reel positions. For Scarecrow symbols in the hotspot 1 bar is added to the left, for Gordon 1 to the right meter. Fill meters in order to transition to a different stage. The batcave stage activates when you land Dr Crane on the hotspot to fill the meter in the temple or Arkham Asylum. Batmobile wilds appear here and shift 1 position left during a respin. On reel 1, a batmobile wild shifts left off the reels. With Bruce Wayne on the hotspot, you get 1 bar to the left, with Gordon 1 bar to the right meter.

The game, as mentioned, also offers the four randomly triggered DC Super Hero Jackpots, the smallest starting with 10, and the biggest with 100,000 credits, therefore, the rewards could be huge.

Batman Begins is an incredible slot that will keep you busy for quite some time. With its many stages, different wilds and payouts that can go over 100,000 credits, it is really a game that could appeal to any slots player, literally, regardless of preferences. It is based on a movie we have all seen, it gives you a decent betting range and significant payouts.

If you’re interested in a more rewarding one that would require for some serious bets, you could also try out Man of Steel, another comic book-themed slot by Playtech, where bets can go up to 2,500 credits, and the base game payout potential is 100,000 credits but per spin! The game is also rich with features, so you don’t need to worry about the entertainment part.