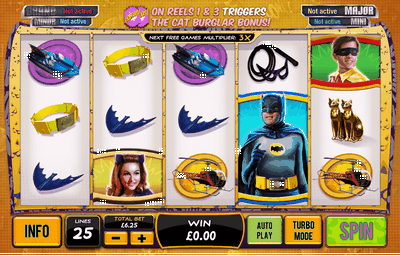 Kapow, Meow! Batman is back with Catwoman hot on his tail. All that was kitsch and camp about the 1960s Adam West television series is celebrated with great affection and a huge sense of fun in Ash Gaming’s Batman & Catwoman Cash video slot.
Pick Me Bonus, Free Spins with Multipliers and the DC Super Heroes Jackpot make this an action packed superhero themed slot.

Catwoman Springs onto Your Desktop

Easily accessed through many of the big online casinos there’s no download needed so, play for free to test the gameplay and paytable, but, in order to access very real cash prizes of the DC Super Heroes Jackpot you’ll need to play for real money.

Play from 0. Turbo Mode function if you prefer a fast pace. We always like an Autoplay until feature function, too.

In a fitting homage to a very popular 1960s TV series the aesthetics of this game feature the pop art style of the original comics alongside clips and soundbites from the programmes. It’s all wonderfully tongue-in-cheek, just as the series was, and is a light relief from the more modern, darkly brooding comic book genre.

Characters Batman, Catwoman and Robin represent the high-paying symbols with Batman paying 400x your bet for 5OAK. Alongside them on the reels are various iconic items of memorabilia from the series as the low-paying symbols.

Wild Symbols are the Bat Signal which substitutes for all except Scatters and pays the highest cash prizes of up to 2500x your bet for 5OAK.

The star of this superhero themed slot is really the fabulous Catwoman and there are some wonderful clips and quotes from Julie Newmar, who played her in the American TV series.

The additional symbol to watch out for is the Scatter Symbol Bonus in garish pink that hits reels one, three and five with a kapow!

If a player lands the Scatter Symbols on reels one and three you trigger the Cat Burglar Bonus, which is a Click Me option on the reels. One will offer a cash prize, but, the other will offer a Multiplier for your next Free Spins Games and will then reward you with lucrative diamond symbols.

If a player has landed the third Scatter as well, you’ll trigger the Free Spins Round. Select your number of Free Spins – up to 25 – from Batman, and from Catwoman you select a symbol to appear stacked. The Free Spins take place on new reels and feature a Multiplier which will hopefully have been increased by the Cat Burglar Bonus.

At the end of the Free Spins Catwoman has a further treat on offer – the Bonus Quick Trigger Chance. She will convert many of the diamond symbols on the base game reels into additional Scatters with the promise of a 50% chance of retriggering Free Spins over the next 20 spins.

Finally, of course, at any random moment you could trigger the fabulous DC Super Heroes Jackpot and be in with a chance to win a spectacular real cash prize. It’s a Pick ‘Em screen which allows you to select cells to determine a win of the Mini, Minor, Major or Grand Jackpots.

There are plenty more in the series if you enjoy it. You could try Batman and the Batgirl Bonanza or Batman and the Riddler of Riches, both from Ash Gaming. They are cracking, reliable additions to this unique series of slots.