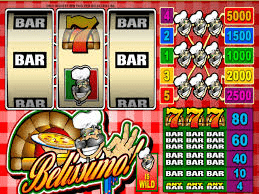 Symbols and Multipliers in the Belissimo online
To boost the amount of credits in your balance, you need to land a combination of 3 identical symbols. Combinations of pictures lined up on an active payline with no gaps are considered as winning. At the same time one of the pictures has to land on the first reel. The online slot features four basic symbols and one special. The regular pictures produce combos by applying the standard conditions.
3 pictures of sevens on one active payline will earn you 80 coins
A triple Bar sign – 60
A double Bar sign – 40
A single Bar sign – 10
Three Bar signs of any kind – 4

If you landed several combos in one spin, the rewards will all be added up and credited to your account. The amount of winnings in credits is calculated by multiplying the number of newly-earned coins by your preset value.

The chef is the slot’s Wild symbol. This picture produces the highest-winning combinations. Your reward will directly depend on which line the combo has been formed. If a combo of three chefs landed on the first payline, your rewards will be 1,000 coins. If on the second line – 1,500, on the third – 2,000, on the fourth – 2,500, on the fifth – 5,000 virtual coins.

Besides earning you the rewards for its own combinations, the Wild symbol can also produce new ones. The Wild is capable of substituting for any missing picture to complete the winning combo.

How to Play the Belissimo Online Slot

You will initially get 2,000 credits at the beginning of the game in the Belissimo slot review Microgaming. Virtual in-game coins of various denominations are used in the game. You have the right to determine the value for each coin in relation to credits. These are the coin values available in the slot: 0. You have to secure your preset value on the control panel by clicking on the +/- buttons.

You have the opportunity to activate one to five paylines. One coin is placed on each payline. So, the maximum bet per spin will amount to 5 coins. To select your desired number of paylines click on the Bet One button.

Bet – displays the size of your total bet per spin (from 0.

Once all settings have been made, all you have to do is launch the game. Click on the Spin button to set the reels in motion. You also have the Bet Max button available for launching the reels. This button activates all paylines at once and launches one single spin.

To the right of the game screen you will see the paytable, which indicates all possible winning combinations and their appropriate rewards. If you have any questions regarding the game, feel free to hit the Help button. This section will display the main rules of the game. At the top of the screen you will also see a speaker icon, which enables/disables the sound effects.

Belissimo casino app is a classic slot game with three reels. The game does not provide any bonus games or free spins. But instead it features the Wild symbol, which not only completes the combos of other pictures, but also forms its own combinations that pay the highest winnings. Wilds represented by the chef landing on the fifth payline will pay you 5,000 virtual coins.