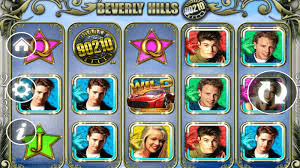 The Beverly Hills 90210 slot review has a five-reeled, three-row structure and 243 paylines! There are eleven different payout symbols in the game, five of the which are characters from the TV show. The highest earning is Brandon Walsh (Jason Priestly) with a payout of 125 coins for a row of five. The other six symbols are the standard Ace, King, Queen, Jack, Ten and Nine symbols in differently coloured stars. The Wild symbol depicts a red sports car and the scatter symbol is the show’s logo. Whenever a Wild appears so does a kiss from the Girls’ lips and whenever there is a payout from a character symbol, a clip of that character is played, including a shirtless Steve Sanders. The bonus features in this game include three randomly triggered modes of play that affect how it pays – which are Left to Right mode, Both Ways mode, where the lines pay from left to right and right to left, and Left to Right Transformer mode, where several symbols in the game can be transformed for a bigger payout. The Free Spins round in the game is triggered by three scatter symbols, and, at the beginning of the round, the player is invited to choose either the Girls or the Boys Free Spins. In the Girls Free Spins, up to five random symbols on the screen will become wild, while in the Boys Free Spins, up to three whole reels become wild for that spin. This whole experience is enhanced by the soundtrack and occasional clip from the TV show.