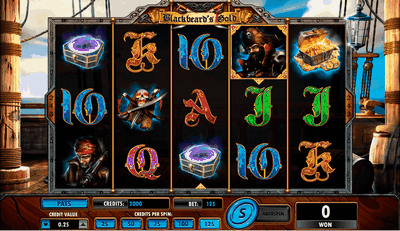 One pirate in particular and his adventurous lifestyle has intrigued people for centuries – Blackbeard. Now you can discover what the mystery is all about for yourself in a unique and treasured online video slot by Amaya Gaming – Blackbeard’s Gold. This game captures all the images, sounds, and themes of your favorite Blackbeard tales, coupled with the imagination and creativity of the best of Amaya. It comes with 3 bonus features, all of which are designed to help you glean back the most gold from Blackbeard’s highly coveted treasure chest.

This 5-reel video slot pays 243 ways, granting you ocean-sized opportunities to win big on your Windows, Mac, or Linux computer, and it is web-based, so no download needed. However, while this game is listed as a 243 ways to win game by Amaya, all is not quite as it seems. Please read my word of warning at the bottom of this page on why I would not play this game for real money.

If You Like Pirate Themes You Will Love This

Amusing animations, and smooth-rolling reels combine with the visual beauty of design to make Blackbeard’s Gold truly entertaining to play. Though the reels spin rather slowly compared to most games, the slow thud as they land goes along with the pirate theme. If you like movies such as Pirates of the Caribbean then you will love this game.

Unlike most games from Amaya, in which background sounds only play when the reels are actively spinning or during a bonus game, Blackbeard’s Gold has a continual soundtrack reminiscent of riding on a pirate ship, complete with creaking wood, splashing water, and seagulls squawking to set the mood. When you spin the reels, it sounds like chains being rolled around, and various musical tunes chime out whenever you land on a winning payline for a really engaging effect.

Blackbeard’s Gold features attractive, highly-detailed artwork, both on the background and on each of the symbols. Rendered in gorgeously ornate detail, a blue 10, green J, purple Q, golden K, and ruby red A make up the 5 lowest-value symbols. Next up is a purple compass, then a fierce red-scarfed pirate and a skull atop two crossed swords. Third from the top value is a tattered version of Blackbeard’s legendary skull-and-crossbones flag, and Blackbeard himself is the second-highest valued symbol. The top symbol to wish for is the open treasure chest piled high with gold coins, which also serves as the game’s wild icon.

Features Including Mulitipliers and Retriggers

The symbol depicting Blackbeard’s face is the first bonus feature of the game. If you land 3 of these handsome symbols consecutively on one line, you will receive payment for the symbols and then watch as they transform into treasure chest wilds, adding even more winnings to your initial prize.

Before getting into the free spinning action, you have to first choose 1 of 5 chests that will determine the number of free spins, multipliers, and wilds that appear in this mode of play. These range anywhere from 10 to 20 free spins, coupled with multipliers worth 2X, 3X, or 4X, and 1 or 2 bonus wilds per reel. Free Spins mode can also be retriggered while carrying out previously received free spins.

The Victory feature is another form of earning more in Free Spins mode, but with a slightly different approach. When the Revenge ship symbol appears on the 1st reel and the Victory symbol appears on the 5th reel, this feature is triggered. Expanding wilds can randomly appear in the Victory feature on reels 2, 3, 4, and/or 5. This Expanding Wild covers the entire reel and turns it into one big wild.

As with the Galleon feature, you are taken to a pick field to choose one out of 5 chests that will determine the number of free spins earned, as well as the multipliers attached to them. Depending on which chest you choose, you can get 3, 4, 5, 7, or 10 free spins and a 1X, 2X, 3X, 4X, or 5X multiplier.

Lower Limits than Most Other Amaya Games

Coin values seem to be on the low end for a game centered around the extravagance of Blackbeard’s life, but they appeal to low-stake and mid-stake slots players. Choose from 0. The minimum bet per spin is 0.

Word of Warning about Blackbeard’s Gold

First off, it saddens me to write this. I think this is one of Amaya’s best slots to date. It looks great, is fun to play and has some great features. While the game has an RTP of 90-92% which is on the low side for video slots, there is something far more worrying.

When the bonus round is activated, the right hand side of the slot shows the number 243, implying that the game is still paying in 243 ways. However, the bonus game does not pay 243 ways. If you hit a wild reel, this is only counted as 1 symbol not 3. This is completely different to how slots normally operate and in my opinion it is very shady.

After a number of players noticed this, the paytable was updated with the following text: “During Free Spins, expanding wild can randomly appear on up to 3 reels, on reels 2,3,4 and/or 5. The expanding wilds convert the reel into single wild symbol (not 3 stacked wilds). However, the bonus game still shows 243 in spite of that being false.

While the game is paying out as expected in terms of percentages, this behavior is something I cannot condone becase it isn’t in line with how slot machines work, which is the reason I advise against playing Blackbeard’s Gold for real money. My advice, stick to the free to play version above.