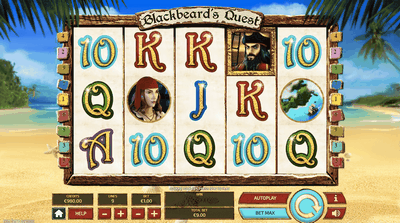 Born in 1680, the pirate known as Blackbeard – actual name Edward Teach – operated across the West Indies and the eastern coast of the North American colonies, plundering ships as he did. Following a stint with the pirate captain Benjamin Hornigold, Blackbeard took over a French slave shop known as La Concorde, renamed her Queen Anne’s Revenge, equipped her with 40 guns and crewed her with over 300 men. His nickname was, of course, the result of his having a big black beard, not to mention his fearsome appearance. He even lit fuses under his hat in order to further frighten his enemies! Interestingly he used his fearsome image to avoid the use of violence, making him quite the clever leader. That said, he still ended up killed in a ferocious battle against one Lieutenant Robert Maynard, who was sent after the pirate by the governor of Virginia Alexander Spotswood.

Following his death, Blackbeard became the inspiration for archetypal pirate in works across all genres and forms, including games. For instance, Tom Horn Gaming brings this infamous pirate to our screens in Blackbeard’s Quest, a 5-reel, 3-row slot set around his voyage to a treasure island. Land the 3 treasure chests on reels 1, 3 and 5 for a round of free spins, while Blackbeard himself is both the wild and the highest paying symbol on the slot!

Blackbeard’s Quest is a slot featuring 5 reels, 3 rows and a total of 9 paylines, formed by landing 3 (or, in case of the high pays, 2) or more matching on adjacent reels. There are 8 paying symbols on the reels, divided between 3 high and 5 low pays. Making the high-paying symbols are a female pirate, a ship and an island, while the traditional A, K, Q, J and 10 card royals make the low pays. Blackbeard himself appears as the wild, able to substitute for all symbols except the scatters. These are the 3 treasure chests found on reels 1, 3 and 5. Land all 3 to earn a round of free spins!

Landing the 3 treasure chest scatters on reels 1, 3 and 5 brings 10 free spins. During this round the chests turn wild, making them able to substitute for all symbols on the reels except for the Blackbeard wild. This also leads to the scatters gaining a slightly different appearance compared to their look during regular spins. The free spins use the same bet as the triggering spin and can be retriggered by, once again, landing all 3 treasure chests.

Tom Horn Gaming brings the full pirate experience in Blackbeard’s Quest! The slot is set on a sunny tropical beach replete with palm trees and, in the distance, you can listen to the sounds of the creatures living in the jungle beyond. The slot itself is crafted out of wood and holds big, detailed symbols. The high pays and the Blackbeard wild are, perhaps obviously, the most notable since they include animations whenever making part of a payline. In addition, whenever you spin the reels a pirate shanty starts playing, further bringing you into the world of the game.

A piratical slot with the potential for some great booty, Blackbeard’s Quest brings the legendary pirate to on-reels life! The chests truly bring some treasure here, as they are key for the free spins and their scatters acting as wilds! Check out Blackbeard’s Quest here at Videoslots Casino today.