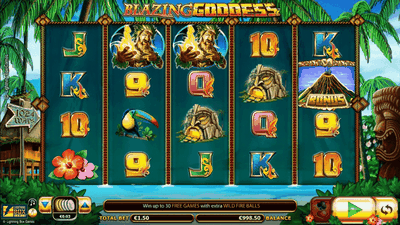 Not many of us are likely to say no to a trip to Hawaii, and if can’t get the real deal, perhaps a virtual experience offered by Lightning Box will do. Especially since it allows one to return home with more money in their pockets than when they first arrived.

Securely nestled under the palm trees you’ll find a 5-reel game area hosting a bearded native, mysterious temple shaped like a head, colourful toucans and flowers, along with playing card icons completely unrelated to the Hawaiian theme. The game pays 1,024 ways with all symbols except Scatters winning when they appear in any position on successive reels. Coin value ranges between €0.

Blazing Goddess casino app symbol is Wild, lands only on reels 2 and 4, subs for all icons other than Scatter and at the same time doubles the prize. Whether the winning combination is created with or without her help, you’ll be offered to gamble and double or quadruple your win up to 5 times. The familiar mechanism of „guess the colour / suit of next card in line“ is used for this purpose.

Scattered Bonus volcano awards 6, 15 or 30 Free Spins, depending on the number of triggering symbols. As volcanos erupt and night falls, once idyllic surroundings adopt a somewhat sinister feel. The goddess becomes literally blazing and fully demonstrates her powers, adding Wild Fireballs to reels 2, 3 and 4 as long as you’re spinning on the house. These new substitute symbols will also stand in for other icons, same as their regular counterpart, but sadly won’t boost the payout. If lucky, you could land 3+ Scatters once again and add up to 30 spins to those initially awarded.