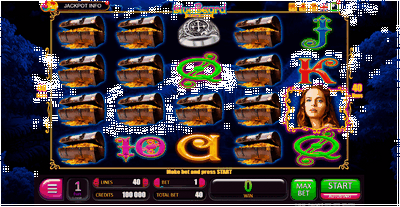 Everyone loves pirate-inspired, themed video slot games, especially if they are good!

Blue Beard” is yet another creation published by “Belatra Games” software provider that can really evoke the feeling that you are a part of a crew.

The enjoyment is certain, and if the luck is on your side, there is no doubt someone will be plundered!

Although the art style is not as detailed as in “Sea Dogs Story”, that is made by the same provider, it should not be looked down upon since it has its charm.

The scenario is set on an island during the dark where the pirates most likely roam to hide their loot. The reels are see-through and have a rich looking frame.

The special wild symbol would be Blue Beard online himself with his yellow eyes staring right back at unsuspected players. The Scatter is dipped in gold and has a square shape with a key carved in the middle.

…beautiful and seductive red-haired lady, treasure chest whose coins are just pouring out, 3 silver cups, two collided knives, and a silver ring are the rest of the characters.

The layout is constructed out of 4 rows and 5 reels.

Although the minimum amount of coins that can be staked as a bet is modest 1 the maximum would be quite the opposite and it is 50!

If the main character whose title of the game carries his name is excluded, the biggest payout is a red-headed lady followed by the treasure chest, while the lowest would be number 10.

Autoplay is also included! A great part about it is that it can be set to a number of spins it should have before it stops, or there is an option to modify the rotations to cease before the bonus or not to stop at all.

The wild in this game like in many others, substitutes for all of the other symbols except for the scatter symbol. If there are 3 or more stacks of scatters then.

Free Game” feature! A number of extra spins that have been won depend on the number of reels of those key characters.

If you thought that was it, you are mistaken!

There are two more mini-games which you can choose between at any time before any win occurs.

The first one is a card game with the dealer, where the player would have to have a higher card than the one shown. If he does have it, then.

… the sum is doubled!

The second would be a black or red feature. The point would be to guess the color of the card that is hidden. When the correct answer is given then.

…the winnings can be multiplied by 2 or even 4!

For both games, there is a rule: if the answer was wrong, the prizes that were initially acquired will be lost.

A general impression of this installation is good. The design is satisfying, as well as the features that are included. If you are a fan of this software provider, do not worry, there are other “Belatra Games” releases to choose from.