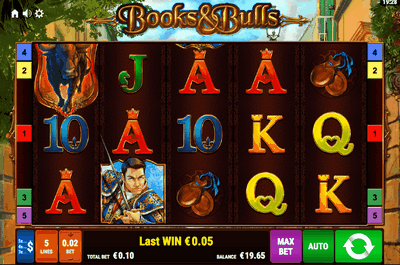 Take a trip down the cobbled streets of sunny Spain in Books & Bulls – a five-reel, 10-payline homage to the noble yet controversial sporting pastime of bullfighting.
Produced by Gamomat, the game looks for all the world like a traditional casino-style slot machine at first glance, but once you scratch beneath the surface a little, you’ll notice a number of little quirks and stylistic flourishes that really do set it apart.

For starters, the moment you first launch the slot you’ll hear the title proudly announced to a background of flamenco guitars as the reels fade into view. The first thing you’ll notice is that beyond the conventional ace-through-ten playing card symbols, the game features a number of unique icons including castanets, colourful cape and sword combos, a flamenco dancer and – of course – a courageous matador.

Playable from anywhere between £0. Books & Bulls comes in at a relatively low-key price point of £0.

Unfortunately, in keeping with the player-friendly pricing structure, the payouts are none-too-spectacular, with the top award being 250x your total bet amount for matching five matador symbols on a valid payline. Smaller payouts range from 200x your bet for scatter symbols all the way down to 0.

That being said, the game does come equipped with two gamble features that players can use to boost their winnings exponentially, with the classic red or black card picking game being joined by a fruit-machine style ladder game that can award up to 300x.

While we’ve already mentioned the cast of unique symbols used in Books & Bulls, it is worth mentioning the two special scatter symbols that are in play throughout the game as well as revisiting the special properties of the afore-mentioned matador.

First up – and somewhat predictably – the slot’s two scatter symbols are represented by a book and a bull, with both icons awarding between 2x and 200x your total bet depending on how many you land.
with both icons launching a bonus feature that we’ll look at later.

On top of that, the matador symbol not only awards the game’s maximum jackpot, but it also acts a wild symbol that can be substituted for any regular icon (i.

Looking at the two bonus features in Books & Bulls, Free Spins are the order of the day, with two unique game modes being activated whenever three, four or five book or bull symbols appear anywhere on the reels during a regular base game spin.

Should you enter the feature with three or more books, you’ll be awarded 10 Free Spins as a random icon is picked as the bonus symbol. This symbol will then expand to fill the reel whenever it has the chance to complete a winning payline, thereby creating multi-line winning combinations and ensuring that big payouts can be hit.

Enter the feature with three or more bulls, meanwhile, and you’ll receive the same allocation of 10 Free Spins, only this time the matador symbol will act as a sticky wild. This means that should one of the game’s highest-paying icons appear anywhere on the reels, it will stay locked in place for the duration of the Free Spins to add to wins.

As an extra added sweetener, both features can be retriggered to unlock a further 10 Free Spins while already in play – all you have to do is hit at least three further scatters.

With its traditional Spanish theme, atmospheric soundtrack and engaging bonus features, it’s fair to say that Books & Bulls is much more than first meets the eye. Though the small betting range a relatively low number of paylines may not be to everyone’s tastes, you’ll find a lot to enjoy in the game and the addition of the two gamble features means that the potential for big wins is high if you’re willing to take the risk. For those of you who are a little more careful with your hard-earned coin, meanwhile, you’ll be pleased to know you can try the game for free at PartyCasino.