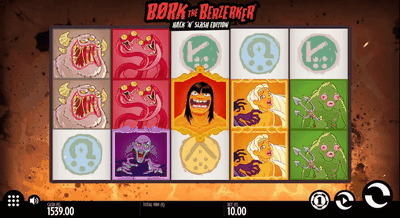 Review of Bork the Berzerker

This neat little slot machine is filled with cartoon violence and thrilling animations, from the smoldering fires in the background of the interface to the chilling swing of Bork’s swordarm. In a way, the theme and even the character of Bork resembles the epic Scandinavian folk tale of Beowulf and Grendel.

Theme and Background of Bork the Berzerker

The story of which this slot machine is heavily inspired is regarded as one of the oldest surviving epic writings of Old English literature. Among scholars it is speculated that the tale of heroic Beowulf was written between 975 and 1025, making the manuscript almost a thousand years old.

Set in around the 7th century, the hero Beowulf is summoned by the King of the Danes
Of course, the hero is successful and later becomes the ruler of the Geats, which is modern day Gothenburg right now. We can see many of these themes back on the Bork The Berzerker slot machine, such a top-less sword-swinging hero, countless monsters and a damsel in distress. Not to mention that the developers behind the game also hail from the same country as the hero of the original story. Like we stated before, sometimes it is good to go back to your roots.

Game Mechanics of Bork the Berzerker

Thunderkick is well known for publishing beautifully crafted slot games that work seamlessly on any device. They are able to do this because they build all their games on a modern HTML5 framework, a successor of the outdated Flash technology. The interface is rather menacing, with embers and cinders sparking up over the reels.

The grid on which the players can spin the reels is made up of 5 reels set in 3 horizontal rows, making up the 5 x 3 interface. There are a total of 20 fixed paylines on which the player can place their bets. Bet sizes can be altered at any time in between spins to suit the player’s style of betting. The minimum coin size is 0.

There is an estimated Return to Player percentage of 97. Bork the Berzerker perfect for casual players or players on a budget. With the decent amount of paylines and the high return to player percentage, winnings are quite frequent without having to break the bank. With a maximum win of 375x your stake, Bork the Berzerker can be classified as a low to medium volatile slot machine.

Slot Features of Bork the Berzerker

The symbols of Bork the Berzerker are modelled after the fearsome beast that our main hero slays and the damsel in distress who he needs to save. These beautifully crafted symbols are the high paying symbols on the reels and are what the player should be aiming for if they want to net the highest payout. For more information on how much each combination will net you, take a look at the paytable below.

The low paying symbols are modelled after the standard playing card symbols, as is a classic feature for Thunderkick slot machines. Although they might not pay as much as the high symbols, frequently landing lower paying symbols might save you from spending all your budget at once.

The wild symbol is omnipotent and omnipresent on every well-made video slot, so Bork the Berzerker is no exception to this rule. The wild symbol is a mysterious symbol that works much like a joker would in a game of cards and in this game is modelled after Bork himself. The wild symbol can be substituted for any other pay table symbol, except the scatter symbol. This aids the player in landing more frequent and multiple winning bet lines.

However, what sets Bork the Berzerker aside from ordinary slot machines is that the wild symbol on this game can expand vertically to cover the entirety of the reel. During the base game, reel 3 can be covered in an entire wild symbol all at once. During the bonus game, the stakes are much higher and there is a chance for both reels 2, 3 and 4 to be covered with the expanding wild symbol.

A Final Word on Bork the Berzerker

Bork the Berzerker is one of Thunderkick’s most iconic slot machines, portraying the Scandinavian roots of the software developer itself. It is simple to play and does not involve too many complicated bonus features to keep track of. This simplistic style of gameplay makes the game so loved among punters, both high rollers and casual gamblers alike. If you are new to Thunderkick slots then this is definitely a good slot to start with, so do no hesitate to give the demo above a couple of spins before you decide to play for real money at one of our top recommended casinos.