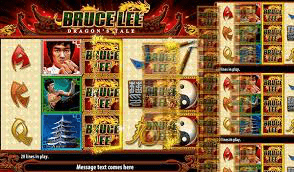 Bruce Lee is back punching, karate chopping, and fly kicking his way through the reels to bring you big wins in the sequel to the original Bruce Lee slot machine and the rewards are even greater!
The Dragon’s Tale title alludes that it is paying homage to Bruce Lee’s final film appearance in Enter the Dragon (which was released in 1973 and directed by Robert Clouse) before his tragic death at the young age of just 32 years old. Deemed to be one of the greatest martial arts films of all time, Bruce Lee has proved to be a true inspiration for mixed martials artists in the modern era and now WMS have immortalised the legend across slot reels once more.

WMS are renowned for their varying structures rather than using the same old ‘template’ with new design and symbols every time and the Bruce Lee Dragon’s Tale slot machine is no different, boasting the Super Multi-Pay game engine. This means it consists of 5 reels and 80 paylines with stakes ranging from 40p to £80 per spin – and combine that with the 95.

Aside from the special symbols which look incredible, I much preferred the symbols that featured in the original Bruce Lee slot machine as items such as a knife were used rather than playing cards which are used here – despite the oriental styling they appear with.

The Bruce Lee Dragon’s Tale logo is the Wild symbol possessing the ability to substitute for all but the Feature symbol and it pays 5x your stake for five on a payline. A stunning image of Bruce Lee with his fist clenched tightly like he is readying himself for one of his powerful ‘inch’ punches is also worth the same amount plus there is one of him in a kicking pose, a Chinese temple, script, Chinese scribing, nunchucks, and Ace to Jack playing card symbols which are the lowest in value, as usual.

In order to access the free spins mode which is a knockout success, never failing to bring big wins, you’ll require the Yin Yang symbol which is appropriate as there are free spins along with a multiplier bonus no matter how many of them you trigger – as the Yin Yang symbol represents ‘things in life are not completely black or white’ but what is crystal clear, is the fact that you’re practically guaranteed huge wins here no matter how many reels trigger the feature – though as always, the more the better.

Two Reels: 10 free spins along with a 6x multiplier

Wow, talk about generosity from WMS – those are some incredible multipliers. While you’d not necessarily expect the ability to retrigger additional free spins due to the vast rewards already on offer, you actually can retrigger 10 more spins by simply landing three or more of the Yin Yang symbols. On top of this the Wild symbols which land on the main set of reels are transferred to the three other reel sets which results in very large wins!

The standard symbols could have been improved but the special symbols are befitting of the legend as he poses in various striking actions, but it’s all about the free spins mode where big multipliers await!