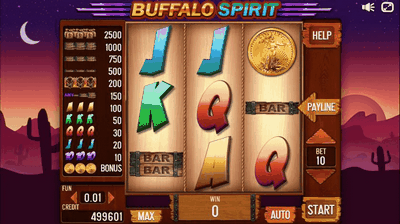 Don’t run away just yet because as frightening as this herd of Buffalo may seem, your spirit will be drastically boosted when they storm across the reels and leave a trail of big wins for you to collect!
With their distinctive horns and long, wiry brown coat, Buffalos are also known as the American Bison and they are a North American mammal which are considered to be a scared animal and religious symbol among Native American tribes such as the Plains Indians. Famous for grazing and roaming the grasslands on massive herds, it’s massive wins that these Buffalo offer thanks to Replicating Wilds and lots of free spins!

The Buffalo Spirit slot machine is part of the G+ Deluxe range of games from WMS just like the Kronos slot machine but unlike its 20 paylines, Buffalo Spirit consists of 5 reels and 30 paylines with an attractive 95. This also leads to generous staking options to suit the slots bankroll of all players as stake per line options begin at 1p and go up to £3 so all paylines activated will see you spin the reels for between 30p and £90!

Lots of Animals in These Grasslands

While the main theme of Buffalo Spirit is of course the Buffalo, it’s not just them which feature on the reels as there are numerous other animals that you’d encounter in the grasslands of Northern America amongst line-up of symbols too.

Joining the wild Buffalo’s on the reels is a large mountain with the brightness of the moon rising at dusk behind it and this is the Scatter, required for the free spins mode. The other symbols on the reels are a yellow desert plant, cactus, venomous snake, lizard, eagle, owl, fox and poker suit icons of diamond, heart, spade and club.

Aside from the free spins mode the other special feature in Buffalo Spirit online slot is the Replicating Wild feature. This occurs with the Buffalo Wild symbol that appears on the third reel and when it pops up it sees a random number of symbols transformed into Wilds with the Buffalo making loud snarling sounds each and every time a symbol is turned Wild – which really springs the slot to life!

A Herd of Free Spins

Prepare yourself for a stampede of wins when you land three or more Scatter symbols on the reels as Buffalo storm onto the reels and award you with free spins that are played on a different set of reels and never fail to result in mammoth wins, but the number of spins you’ll receive depends on how many Scatter’s land.

While the maximum of 40 free spins isn’t as much as the 50 offered in the Zeus III slot machine, very big wins are achievable, though more often than not it’s three Scatter’s you’ll land for 10 free spins. All wins during free spins are subject to a 2x multiplier too and additional spins can be triggered by landing more Scatter symbols again.

Alice and the Mad Party

Kingdom of the Titans

Will Your Spirit Be Lifted or Sunk?

A Buffalo might not seem like the most appealing theme for an online slot machine but it’s actually rather enjoyable – though most of that enjoyment comes from the free spins mode. With up to 40 initial free spins to be triggered and all wins being doubled it’s certainly a very rewarding free spins mode, plus the Replicating Wilds feature boosts the balance too! Unfortunately, the sounds don’t evoke the atmosphere of the wilderness as they are standard stock sounds that could be used in any slot rather than the growls and rushing of a Buffalo.

Thankfully WMS took feedback from players on board and released a sequel titled Double Buffalo Spirit slot machine which has an even more stunning design and sounds that make you feel like you’re actually in the North American wilderness surrounded by Buffalo!