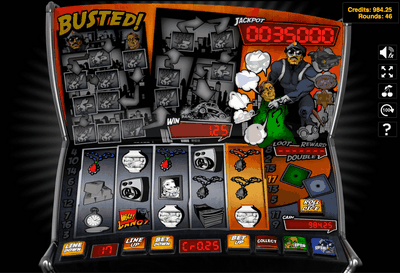 Pick a side and choose carefully, because your initial choice might just make the difference between a big win and a wasted spin.

Busted mobile slot is a video slot game designed by WinADay that puts players in the shoes of either a police officer or a thief, looking for an easy buck. The game will let you play as either of them at every spin, leaving you the choice to follow your gut feeling and, with a little luck, step a little closet to the ultimate jackpot.

Take a moment to read our full review of Busted to get to know this fun and original slot game a little better, and to make sure that you have all cards in hand to win big.

In terms of pure graphics, Busted relies on an old-school arcade slot machine look that will take players back to their youth, when they were playing on the machine of their local pub.

The entire game screen is actually shaped like a classic slot machine, with flashing square buttons at the bottom and many bonus displays in the top part. An illustration of a police officer catching a thief occupies the entire right-hand side.

Busted online slot might not be as visually stunning as other games, but it does manage to recreate that arcade feel that many players know and love. Not let’s see how to get the game started in the next section.

A Few Clicks and You Will Be Ready to Go

Busted has an original gameplay that lets players choose to play either as a cop or as a thief. The goal remains the same: landing winning combinations as often as possible.

The game matrix contains 5 spinning reels and 17 paylines in total, on which the symbol combinations have to land in order to count and trigger a cash prize. Use the buttons under the reels to select your wager and the number of paylines you want to activate and bet on for your next spin. You can click on either the cop or the robber spin button to launch the game.

All rewards are based on the symbols you line up and the size of your wager. Add a little thrill to the whole process and play on autospin mode. This will allow the reels to spin freely for as long as you want, placing your bet automatically over and over again.

The basic list of reel symbols in Busted casino slots comprises all the common icons that can be found on the reels during the game. All winning combinations consist of 3, 4 or 5 identical symbols lined up on a payline.

The most common symbols in the game are the luxury watch, the gold ring, the ruby necklace and the ancient Chinese vase. Your rewards can go up to 100 times the value of your bet with these symbols, so try to land as many of them as you can.

The rest of the menu contains the dollar bills, the painting, the gold bars and the safe. These symbols are a little more elusive during the game, but they can trigger rewards up to 1,000 times the value of your wager. This should be incentive enough for any ambitious players to keep an eye out for these icons at all times. Besides, there are even more symbols hidden in the game that you also need to know about.

Several Games in One

Busted has many secret features ready to help players win a little extra. You can start by keeping an eye out for the gun symbol, which is the wild card of the game and can replace all the symbols mentioned previously.

The double symbol can only appear on reel 5 to initiate the double up mini game. If you choose to play, you will be betting your last reward. Pick either the cop of the thief, and if you choose correctly your reward will be doubled – or lost forever, should you pick the wrong side.

A Rich Gameplay and High Stakes

Busted has all the ingredients of a fun arcade slot game, plus a lot of bonus features and a very original gameplay.

Whichever side you pick, you can be sure that you are in for an epic chase that can lead you to some big wins, if you manage to elude your opponent and flee with the treasure.