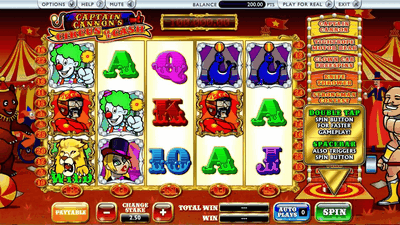 The circus has often been referred to as “The Greatest Show on Earth. Complete with humourous clowns, death-defying acrobats, trained animal acts, incredible sideshows, spirit-lifting music and all kinds of treats to eat, it is a colourful, noisy, non-stop entertainment extravaganza. And that is exactly the type of atmosphere that the “Captain Cannon’s Circus of Cash” slot game seeks to bring to online casinos.
A rather long introduction precedes the opening of the slot game. It has to be long because it showcases not only the 5-reel, 25-payline main attraction but also no fewer than nine different bonus features that add to the excitement of playing under the big top. Clicking on “Skip Into” at any time will halt the introduction and open the game window.

The amount of distraction present on Captain Cannon’s Circus of Cash is very high, indeed. A bear dances atop a large ball at the left side of the screen, while a Strongman nods, gripping a huge hammer in anticipation of bonuses to come. The crowd noise of the midway can be heard until the reels begin to spin and the calliope music kicks in.

To begin playing Captain Cannon’s Circus of Cash, the player must choose the amount to wager per line by using the +/- toggles located next to the “Change Stake” indicator below the second and third reels. Values range from £0. It is not necessary to select which lines to play, however. All 25 lines are always active.

To set the reels in motion, click on the green “Spin” button in the lower right corner. When the five reels come to rest, any winning amounts will be displayed in the “Win” and “Total Win” indicators below reels four and five. Funds available can be seen in the “Balance” counter at the top right corner of the screen. Control options available on Captain Cannon’s Circus of Cash include “Auto Plays” for 5 to 99 spins or “Until Bonus,” as well as a Sound on/off toggle.

The basic symbols on the reels are the standard cards, Tens through Aces. Catching three or more of them matching on a payline is worth from 4X to 100X. Higher payouts come from matching three or more Performing Seal, Clown, Magician or Daredevil symbols, valued at 20X to 5000X. The Lion symbol is wild. It substitutes for any of the other symbols but does not pay out on its own.

At the very bottom of the reels are the Bonus Lights: B-O-N-U-S. On each spin (except for Free Spins) a random number of these lights may light. Should all five light up on the same spin, the bonus selection hammer will be triggered. The screen will darken, except for the Strongman, who will use his hammer to strike the red bonus button and light up sections on the nine-level Bonus Ladder. Depending on which level lights up last, one of nine bonuses will be awarded in three categories: in-reel bonus rounds, caravan sideshow bonus rounds and main event bonus rounds.

The lowest level bonus is the “Fire Breather,” who will appear beneath the reels and randomly set one or more of them on fire, making all three reel symbols wild. Whatever resulting wins occur will be added to the pay out for the triggering spin.

A level up from the Fire Breather is the “Lion Tamer,” who uses a whip to turn a random number of reel positions into wild Lion symbols. And the third of the in-reel bonuses is the “Rampaging Elephant,” a huge pachyderm that knocks symbols right off the reels to be replaced by new ones cascading down.

The caravan sideshow bonuses include carts of games that roll in front of the reels, such as the “Bearded Lady” and the “Strongman Contest,” where choosing a character reveals a cash prize. The “Knife Thrower” invites the player to pop five balloons to reveal cash rewards or extra throws.

At the top of the bonus ladder are three features that require secondary screens to play out. The “Clown Car” has balloons that award Free Spins and Stake Multipliers. The “Tightrope Motor Bear” rides a motorbike across a tightrope so that the further he goes the more the player wins. And “Captain Cannon” climbs into his cannon to be fired off into the sky. Each object he collides with along the way awards a prize and either speeds or slow him on his journey until he collides with a water barrel and the bonus ends.

Captain Cannon’s Circus of Cash also has a Progressive Jackpot available within the three Main Event bonus rounds. If a Golden Clown appears during any of the bonus games, the Jackpot is won.