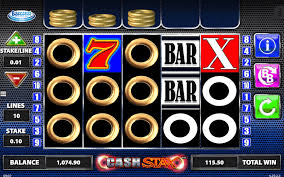 Straight to the Point

Visually speaking, Cash Stax online slot is a rather cold and simple slot game with very few features. The reels and command buttons are set on a metallic background with almost no decorations in sight. The only colourful elements on the screen are actually the command buttons on the sides and some of the reel symbols.

Cash Stax online is a very sober game that could be easily forgotten if you don’t dig deeper and actually try a few spins. Fortunately, the game quickly gets more exciting as soon as the reels are moving.

You Literally Couldn’t Find a Simpler Set of Rules

Cash Stax sticks to a short number of rules, with 5 reels and 10 paylines to begin with. The plus and minus buttons on the left side will help you bet from 0. As soon as the total stake reaches 2 credits, you are playing on 20 paylines. Cash Stax slot machine also features a very useful autospin game mode to help you place the same wager into play several times in a row in just a few clicks.

As we have mentioned before, Cash Stax has a super high volatility that makes scoring any win on the base game quite challenging. The basic paytable contains only X signs, bar signs and 7s, with a top reward set at only 50 times your current wager. Now winning big might be tough at first, but Cash Stax still has a few interesting bonuses to help you out.

A Progressive Gameplay and Bonuses

The joker symbol is, quite predictably, the wild card of Cash Stax. You can use it to replace the other symbols on the reels, which will prove useful quite often during the game. Moreover, you can activate the Big Bet game mode at any time to play 5 spins in a row with 30 paylines activated, which noticeably increasing your winning chances.

The O symbols are a little special in Cash Stax, as each of them carries a chance to turn into a golden O and initiate the free spin round. You start with 5 free games and the possibility to earn more by landing more Os. Fill up the screen with this special icon to multiply your total stake by 5 instantly.

Cash Stax is a slot game designed for hard-core gamblers who do not mind simple rules, few bonuses and a somewhat dry universe. This Barcrest creation looks like a typical arcade slot machine with some original gameplay elements, but overall you will be facing a real challenge with this game.

The typical Barcrest gameplay used in Cash Stax is reminiscent of other creations from the studio such as Action Bank or 7s to Burn, just to name a couple. If you like progressive gameplays and do not mind a nice challenge, then Cash Stax could be a good match for you.