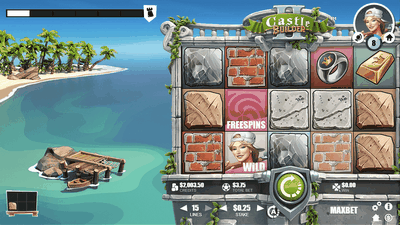 Head to the small fictional province of New Forana in the Meadowlands and get to work building castles to win the hand of the daughter of King Lornquer III. Impress his majesty and you’ll win prizes – that’s the somewhat strange concept behind Castle Builder II.
First choose an avatar – you can pick Sam or Mandy first. You’ll then need to complete the game once to unlock the Igor avatar. The reels are made up of wood, bricks, granite and iron ore which appear alongside rings, gold, treasure. The crown is the most rewarding symbol, awarding 50 times your stake if you land 5 on a payline. The king is the game’s wild.

Collect building materials by landing winning combinations of them on the same spin. These are then collected in a pallet – once a pallet is fully loaded, a Building Block is formed. As more Building Blocks are created, you’ll move a step closer to completing the building. Keep track of your progress via the meter in the top left corner of the wheels.

Land 3, 4 or 5 scatters symbols on the same spin and you’ll trigger the Free Spins feature and be awarded 10, 15 or 20 free spins. Here you’ll win the usual prizes as well as getting the chance to accumulate more building materials.

After you have completed a castle, there will be a Royal Wedding and the princess must choose an admirer – the more castles built, the more admirers get attracted. Choose an admirer and you’ll win a bonus prize.

You’ll first start playing in the Bronze Cup Challenge where you need to land 6 building materials in a pallet. The silver, gold and platinum cup levels require 9, 12 or 15 building materials and are subsequently much harder to achieve. They do award much bigger potential prizes though so you take your chances here.

Once you’ve completed the Bronze Cup Challenge, you’ll unlock the Free Building Mode which allows you to build whatever castle you like in all unlocked territories. The World Map offers 15 different kingdoms in all. Cup Challenge.

Just like the original, Castle Builder Ii casino slots of variety and interactivity. The volatility is much higher here than the original though as the variance is high. The design here is superb. The gameplay is quite complicated and takes a while to get your head around.

We recommend a session in demo mode until you become acquainted with the building process. Once you’ve got used to the set-up, there much to like here. It looks terrific, comes with plenty of action and offers a shot at come chunky payouts. This isn’t a slot for a classic fruity fan. If you’re after a hybrid between a slot and a build your own world-style video game, then Castle Builder II is well worth a look.