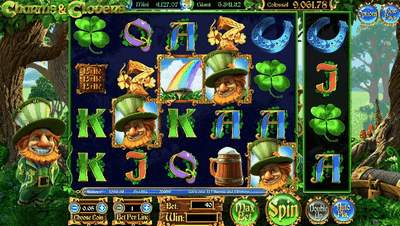 The Charms and Clovers slot game is one of the third generation of games released by Betsoft with a lot more emphasis on actual gameplay, rather than just being about the way the games look. It still looks great, by the way, but a lot more attention to detail has been made in making it good to play.
Charms and Clovers is a 6-reel, 40-payline slot machine powered by Betsoft. The game is inspired by the vibrant Irish mythology and the playful little elves hiding their pots of gold on the fields of clover.

Here we have a completely free version of Charms and Clovers slots from Betsoft Gaming. This free game can be played instantly with no download or registration required.

The main symbols on the reels include mostly Irish motifs, such as leprechauns, four-leaf-clovers, pots of gold, ale mugs, rainbows, horseshoes, golden sevens, and triple bars. Additionally, you will come across traditional playing card icons – A, Q, K, and J.

There are 4 bonus features in the game, and they are activated by covering the entire reel six with four symbols of a kind. Those are the Money Wheel, the Mega Symbols feature, Pots of Gold feature, and Golden Bonus.

The Money Wheel can award 15x your total stake, or, alternatively, provide players with a chance to advance to the Super Wheel and Mega Wheel. Once in, you could grab the Mini, Giant, or Colossal Jackpot. However, keep in mind that, in order to qualify for it, you are required to play at the highest bet available.

The Mega Symbol feature will give you eight free spins, enhanced with gigantic, 3×3 leprechaun symbols added to the grid. Pots of Gold feature will provide you with eight free games, whereas on each free spin, three extra Wilds will be added to the reels, to boost your winning potential. Finally, Golden Bonus will transport you to another screen where you will be prompted to pick one out of five pots of gold, to reveal the prizes of up to 20x your bet.

Charms and Clovers slot is a high-variance offering with an RTP of 96. The biggest potential win is 350,000 coins, awarded with the help of four lucrative bonuses, triggered on the sixth reel.

After any spin, players may use the Double Up feature, and play the Heads or Tails mini-game, for a chance to double their balance. You can choose to gamble all of half of your winnings, but keep in mind that you are not allowed to use Double Up after you trigger any sixth reel bonus.