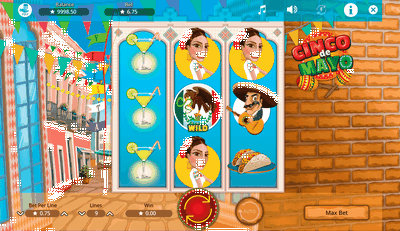 May the Fifth Be with You

Mexico’s favourite annual holiday and most famous military victory is the inspiration for Cinco de Mayo, a colourful 3-reel slot from Booming Games. Despite only having three reels and nine paylines, Cinco de Mayo is anything but dull. The reels are set against a backdrop depicting a traditional Mexican town with gaily painted houses and pennants fluttering in the breeze. The game’s logo, featuring a pair of maracas, sits to the right of the reels against a red brick wall. It’s simply but tastefully done.

The reels themselves are graced by some typically Mexican characters – plus a couple of loaded tacos, filled with beef and topped with melted cheese, the way tacos are meant to be. Symbols include a moustached mariachi musician strumming the guitar and a Hispanic salsa dancer. There’s also a margarita cocktail that will have you licking your lips in anticipation. It’s thirsty work playing slots.

A Fiesta of Fun

Booming Games have kept the game controls small and discreet so as not to intrude on the fetching picture they’ve painted on the reels. Use the controls at the bottom of the screen to adjust the number of active paylines and to set the line bet, which ranges from 0. There’s a max bet button and an autospin option that allows you to get very specific if you’re a control freak.

Before you hit the spin button and start chasing down tacos, there’s just one decision to make: do you crank up the soundtrack or mute it altogether? We say turn it up, for a few spins at least. The traditional Mexican music will have you tapping your feet and nodding along to every trill of the trumpet and raked six-string arpeggio. In the base game, three guitar players are worth 45 and three Corona beers are worth 90.

Occupying the upper echelons in the symbol hierarchy are Cinco de Mayo’s scatter and wild. The former is played by a coloured star marked as scatter.
Wild is the Mexican flag and is worth 150 for three. It will substitute for all of the regular symbols except for scatter.

Booming Games are fond of letting players gamble their wins, with a straightforward 50/50 bet used to determine the outcome. Not only can you do this with regular wins, but it can be done with free spins too. The most times you can gamble in succession is 10, though it’s fair to assume that the average player will only chance their luck once or twice at most.

Although there’s not a feature game in Cinco de Mayo, there are a few traits built into the scatter and wild symbols to keep things as fresh as the lime in a Corona. Free spins can be retriggered for example by landing another three scatters while collecting your first 10. There’s also 2-Way Pay, activated when you land three wilds in view. This will make all wins pay left to right and right to left for the next 10 spins.

If you like the feel of this medium variance slot from Booming Games try Cherry Bomb, another of their 3-reel games which has very similar features. Thematically, there’s also the likes of viva Mexico by Roundstone, which mines similar South American tropes.

This Mex for a Good ‘Un

Cinco de Mayo looks lip-smackingly good and is a pleasure to play, despite only having three reels and no feature game. Celebrate Mexico’s most famous military victory by raising glasses and rolling the reels of Cinco de Mayo.