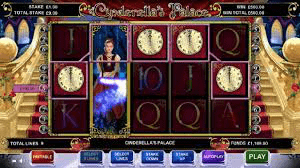 Cayetano gives us the famous story of Cinderella’s Palace, a game with 5 reels and 9 paylines. There are payouts of up to 0,000 offered, while the features are a mix of wild symbols, multipliers and free spins.

The game has a theme that’s obviously based on the well-known story of Cinderella and her lost shoe. The setting of the action is at the castle where the ball took place, and where Cinderella lost her shoe as she was leaving at midnight. You will find right behind the reels the image of the stairs that lead to the palace, with a red carpet laid on it. The entire design is superbly executed and it shows that Cayetano has a history of offering high quality graphics in their titles. The reels are encased in a light green border and their background is a dark red with small decorations in the corners. The symbols include the poker cards 10 to A, followed by the single shoe placed on a pillow, the clock as it nears midnight, the prince, the fairy godmother and Cinderella.

With the line wagers starting at . The bets will go up to 5 when all the lines are selected here. The payouts can go up to 0,000 thanks to the generous 10,000 coins prize that is offered when the player has five symbols with Cinderella on the payline.

The fairy godmother acts as the symbol that awards the free spins. The player needs three to five of these icons and they get the round of Free Spins plus some additional payouts. During the following round the player gets 15 spins for free plus a 2x multiplier for all the payouts from those games.

The Carriage symbol will appear on the middle three reels and you have all three you get the Bonus round called Carriage to Riches. You advance with the carriage on the road towards the castle and the payouts vary between 50x and 250x the wager.

The Cinderella symbol not only awards the top payout, but it is also an expanding wild. Whenever you get this symbol in the game it expands and covers the reel it appears on.

Cinderella’s Palace is a gorgeous game that will remind you of a time when fantasy childhood stories held much to the imagination. With a decent set of features and a max prize of 0,000, there is little reason why not to play this Slot.