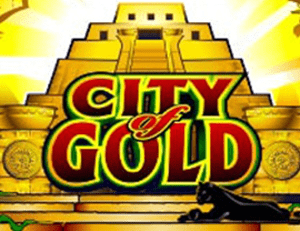 With the online slot machine community growing bigger and bigger, we can now find a slot game regarding every theme possible in this world. And what could be more attractive and inviting than the “Gold” word in it? This BetOnSoft online video slot game called City of Gold talks about the forgotten city from the Aztec civilisation and drags you to go after the city treasure. With a golden theme and intriguing music, City of Gold most definitely is one of the best online video slot games. It has the two of the best characteristics that propel an online video slot game to the top of the player’s interests – it’s entertaining and it’s rewarding. Give it a spin on one of our sites, claim the bonuses and fill your pockets while entertaining yourself with the reels in this Aztec old golden town.

Gameplay / How to Play

City of gold is five reels 20 paylines online video slot game developed in 2012 which is still among top video slot games in the world. With denominations from £0. Max Bet option for the max of £160 per spin. Auto Play is also an option here, where you need to set the number of spins and denomination before you sit back and relax, while the game spins the reels for you, and fills your pocket with lucrative rewards.

The symbols of the game are all related to the treasure of the Golden City and the Aztec civilisation. You can find the lower valued symbols inspired by a deck of cards, which include the 10, Jack, Queen, King, and Ace. The higher valued symbols are a golden necklace, purple statue, golden idol, Crystal Skull and tessellated.

Apart from these standard symbols, there are three special symbols. The Gong, the Temple icon and the Map. The Gong is the Wild symbol of the game and it is a substitute for the normal symbols from above. Each time the Gong is a part of a winning combination, the win is doubled, however, it doesn’t replace the Scatter and the feature Game symbols. The Scatter and the Feature Game symbols are the ones that activate the Bonus Features of the game.

Anything you win during the Free Spins feature is tripled. The feature can be retriggered if there are three or more Scatter symbols on the reels during this feature.

Feature Game – Above the reels, there are 10 empty circles. That is where the Golden Orbs go when you hit three or more Maps symbols anywhere on the reels. As soon as you collect 10 of them you go to the Feature Game. You will be taken to a second screen where you need to turn the wheels of the fountain of gold ahead and determine the flow of the gold. Follow the instructions and win lucrative wins.

Give the City of Gold a spin at one of our casinos, collect the promotions and fill your pocket with cash.