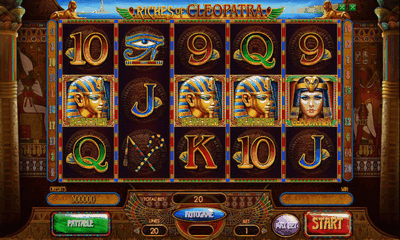 Its developer and provider is Blueprint. We won’t surprise our frequent readers by admitting that we very much enjoy reviewing titles from this studio. Whether these are classic, jackpot or video slots, they will most likely come with a variety of features, as well as with the quality graphics and entertaining stories.
Blueprint appeared on the highly competitive software developing arena quite a while ago, and managed to make its way to the top due to top-notch games that are relevant and can meet the demands of the modern gamers.

Cleopatra was the last active ruler of the Ptolemaic Kingdom of Egypt. Known for her close connections with the Roman Emperor Caesar, as well as with Mark Antony, the queen left many mysteries surrounding her historic figure. It was no doubt, however, that she was a powerful head of state, and was equally hated and admired by her peers.

The grid contains not only her portrait, but also depictions of many other traditional icons – Eye of Ra and Ankh amulets, Scarabs, mask of Tutankhamun, as well as the pyramids. This is a colorful virtual journey back to the age of the great rulers.

The grid contains five reels, three rows, and twenty adjustable win lines. Each of these lines may hold a stake between 0. The RTP of the release is 95. Automatic rotations, turbo spins, and numerous other convenient controls are included into the mechanics.

Cleopatra is the Wild card of the release worth up to 10,000x the line stake for her five-of-a-kind royal appearance on the grid.

Scattered Eye of Horus only acts as the bonus activator.

Look for the Statue of Ra, for its five icons on the win line will pay up to 500x.

The sacred Ankh cross is worth up to 250x.

Five pyramids are evaluated at 200x the line stake.

Up to 150x is paid for either a full set of Scarabs of Golden Masks.

Card icons from Ace to nine will only pay up to 50x.

Any win that has an active Wild in it will come with the multipliers between x1 to x10. This feature is active in both the base game and the free spins.

As to the bonus rotations, three Scatters are enough to unlock them. Before the session begins, you are to pick any of the listed treasures to find out how many rolls you are entitled to. Once the free spins are done, you are to pick another treasure to reveal the multiplier that will apply to the overall payout.

Anytime during the extra rolls, you may retrigger more by another three Eye of Horus amulets. Once that is done, you will be given the exact same amount of rotations that you initially picked.

Vera & John, which has more than seven years of experience and a license from the Malta Gaming Authority. Its services are targeted at Denmark and the United Kingdom, but other language adaptations are also available.

InterCasino exists since 1996, and has permits from MGA and the United Kingdom Gambling Commission. The platform combines a Poker room with up to 700 releases from Realistic, Cryptologic, ELK, and other developers.

Genting has permits from the jurisdiction of Alderney, as well as from the UKGC. It dates back to 2010 and provides numerous betting services, including games, Sportsbook, and the Poker room.

Vegas Paradise abides MGA and UKGC requirements, has more than five years of experience, and supports browser-based play from desktops and portable devices. English is the only language offered here.

Conquer comes with a variety of cards, e-wallets, and prepaid vouchers in the cashier. Deposits and withdrawals are allowed in more than four currencies. Ratings at leading gambling portals are high.

Mars Attacks comes with an engaging story about aliens taking over our planet. This action is complemented with up to twenty-four free spins.

Super Lucky Charms welcomes players on the Irish soil, even though it is the virtual gaming journey. Special crystals trigger bonus rotations, and multipliers reach up to x5 the wins.

Primal Megaways takes us back to the beginning of time. Up to thirty bonus rotations come with Wild multipliers and other highlights.

It is no secret that software developers enjoy slots dedicated to the Egyptian theme.

Book of Sun by Booongo send us investigating the legend of Horus. This journey is combined with the free spins and Expanding Wilds.

Tut’s Twister by Yggdrasil Gaming lets out the demons of the ancient mythology, and triggers Wild whirlwinds. Win multipliers, bonus rotations, and Walking Wilds are among the highlights.

Coins of Egypt by Net Entertainment is an entertaining hunt for the ancient gold. Possibilities of the free spins here are enhanced by the three unique seals.