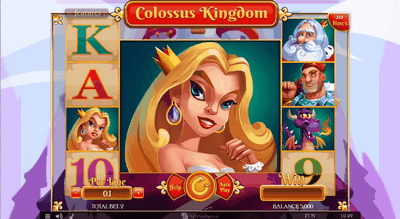 Top-rated developer, Spinomenal, has announced another slot game for their quality portfolio. The next-generation slot game, Colossus Kingdom, features a cinematic theme, beautiful graphics and animations, along with an enchanting soundtrack. Players will become immersed in the kingdom as they spin the innovative reel format of 4-3-3-3-4 symbol structure.
Features of Colossus Kingdom:
Once the game is loaded, players will find 20 paylines and a host of symbols. The traditional symbols are there, including 9, 10, J, Q, K and A along with the characters of the kingdom. A purple dragon, beautiful princess, the bearded king and the Centurion can all be found on the reels.

The magician and his book of spells are the wild in this game. The wild will substitute for any symbol except the free spins and bonus when it appears on the reels. Five wild symbols will provide a winning line pay of the bet per line x160.

The castle door is the symbol players will want to see to activate extra spins. The symbol will only appear as a Colossus one on reels 2-4. When the symbol appears in 3×3 form, players are given extra spins!

According to a recent press release…

Lior Shvartz, the CEO of Spinomenal, commented on the new online slot game by stating: “A commitment to quality and innovation is central to how we conduct our business, and we are excited to deliver on our potential as we bring a fresh approach to the video slots market with the stand out features being the option to gamble and gain more free spins together with the 3×3 Colossal reel in the middle of the reels. With more games rolling out shortly, this new Colossus Kingdom bonus has all the versatility needed for veteran players while the easy-to-engage interface is ideal to pick-up new slots fans. With so many winning possibilities on every spin this game really is a fairytale.

A bonus round can be activated when the bonus wheel is found on the reels in 3×3 form. The bonus game is wheel of fortune-style and offers players multipliers with each spin. The title also includes a Mystery Symbol feature. Once the reels stop spinning, if there are mystery symbols on the reels, they will be uncovered, and 1 random normal sized symbol will be revealed.

Yet another feature of this slot title is the Colossus Spin. This feature can appear at random when the reels are spinning. A full sized Colossus symbol 3×3 in size will appear at the center. All symbols except the wild can appear as a Colossus in the middle of the reels.

On top of all that, the game also includes a gamble feature. Players can access the gamble screen once the extra spins feature has been activated. Players can win up to 40 spins and choose to collect the current spins offered or risk some to try and win more.