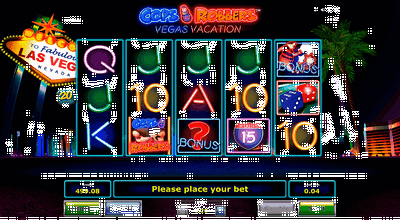 Cops ‘n’ Robbers Vegas Vacation online slot is played on a 5×3 reel set with 20 different win lines, there are also 4 different modifiers for you to trigger during the base game. As you would expect with the game being set in Las Vegas, the reels are neon themed with the symbols being those that are generally seen in a slot game such as the K, J, Q and 10. There are also the various bonus symbols that correspond with the game’s bonus rounds and the wild symbol.
Cops ‘n’ Robbers Vegas Vacation Buttons

This is the amount that you will be betting per spin of the game. This can be changed by either pressing the (+) or the (-) buttons to either increase or decrease the amount.

If you have decided the amount that you want to play the slot with, then press the Start button to get the reels going.

During the game, Bert may blow up the reels after a losing spin and this may just award you a win or a bonus. This may happen more than once throughout your gameplay.

If you’re lucky, Bert may add extra wild symbols to reel 5 of the grid and these will slide left with each spin. He will keep adding them on to your game until he gets chased off.

Bert may also swing in and slide copies of reel 1 across.

During the spin, Bert may run behind the reels and add one or more wild to it.

Landing two bonus symbols on reels 1 and 2 of the game and then a corresponding symbol on reel 5 of the game. This bonus will make Bonzo dig up cash prizes or maybe even an upgrade to a better bonus.

If you get two bonus symbols on reels 1, 2 and the corresponding bonus symbol on reel 5. Each spin of the reel will result in the spotlight adding more wilds on to the reels. You will then be given 5 free spins in which you might win cash or the ability to upgrade to a better bonus.

On the Run Bonus

This bonus is again awarded by landing two of the generic bonus symbols on the first and second reel of the game. As well as these two bonus symbols you will need to land the corresponding bonus symbol on reel 5 of the game. Bert will then roll his dice and move around the board and the golden trail, collecting cash on his way. If you land on the arrows then Bert will go in to the Golden Trail where you will get unlimited rolls until Bert lands on the exit arrow. As well as this, Bonzo may spin the Vegas reel which can award additional bonuses and enhancements.

As with the other bonus rounds, this is awarded by landing bonus symbols on reels 1 and 2 of the game and then the corresponding bonus symbol on reel 5. You will play unlimited Free Spins while Bert and Bonzo are out robbing. Bonzo’s bouncing wilds will move from reel to reel with every spin of the slot and will then double the win when substituting. After the robbery, more bouncing wilds will be added to your reels. If you manage to rob the casino you may just win your total bet with a x1000 multiplier as well as the winnings from the bonus round. Watch out though as the cops and robbers may appear on reels 1 and 5 and if the robbers get caught then Bert will go into an ID parade.