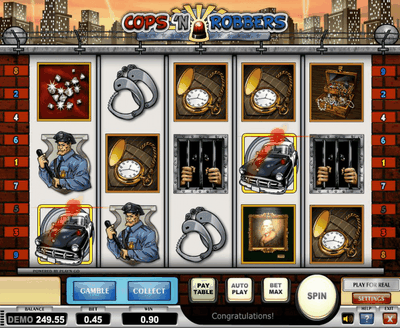 For new players at Speedy Casino

Do you think you are capable of escaping the officers of the law and pocketing a big win in the process? If yes, Cops ‘N’ Robbers is just the game for you. This is a Play’n GO release that plays on 9 adjustable paylines, 5 reels, and 3 rows of symbols.

The slot is playable from . Play’n GO released the original cartoonish version of the game some time ago but then decided to relaunch it with improved graphics and animations.

The action in the new version of Cops ‘N’ Robbers takes place behind bars in a city jail, with barbed wire surrounding the reels. The game boosts players’ winning chances with a wild symbol, scatters, and a Car Chase Bonus feature.

The above figures are accurate when all 9 lines are active.

In this fresh take on the original Cops ‘N’ Robbers slot, you have all the familiar symbols from the first installment but with better, crisper design and animations. The style of the game is still cartoonish but this only works to its advantage, giving it a quirkier feel.

One thing we like about Cops ‘N’ Robbers is that the developers have shown some imagination with the low-value symbols instead of going for the usual boring card initials. All icons incorporated into this slot are related to its theme in one way or another.

Align five cop symbols on one or more lines, and you get 150x your line stake. Five symbols with the prisoner behind bars equate a payout of 125x your bet per line. Five of a kind with the mugshot or the handcuffs pays 100 credits per credit bet. You need a minimum of three matches for a payout with these symbols.

Next in line are the symbols with the female portrait and the pocket watch. You get 250x your line bet for five of a kind with either of those. The three regular symbols with the highest value return monetary prizes for two or more matches.

You get 500 coins for five bags of diamonds or five security briefcases. The bag of money rewards lucky players with up to 750x their bets per line. There are two special symbols in this slot but we cover them in the next section.

Cops ‘N’ Robbers is not exactly rich in extra features but still, there are enough of those to hold spinners’ attention. There are two specials symbols you need to keep your eyes peeled for. The first one is the wild, represented by a security safe full of gold nuggets.

This one pays up to 3,000 coins for five of a kind and replaces all other symbols, the only exception being the scatter. Additionally, it doubles all wins it helps create.

The other symbol of special interest is the above-mentioned scatter which contains a patrol car with flashing red lights. Being scattered, these symbols do not have to hit an active line to pay. They award cash prizes as long as the matches hit consecutive reels.

Moreover, the scatter pays in both directions, not only from left to right like the rest of the symbols. It awards 250 coins for five matches, 25 coins for four matches, 3 coins for three matches, and 2 coins for the minimum of two matches.

But there is more to this symbol than this. When you land three or more scatters in any reel position on the same spin, you trigger the Car Chase Bonus. As the name suggests, this is a round of free spins during which players are chased by a patrol car and their goal is to escape from the cops.

When players arrive at a roadblock, they must pick a direction, either left or right. Choose the wrong direction and you are busted, i. If you manage to escape the cops, the game rewards you for your efforts by doubling all wins you have generated during your free spins.

Despite the revamping Play’n GO developers have given it, Cops ‘N’ Robbers remains a rather simple slot. This is pretty much the same product but with improved graphics and animations. Spinners are a bit restricted by the availability of 9 lines only but the game is still playable, especially if you are keen on the original Play’n GO release.