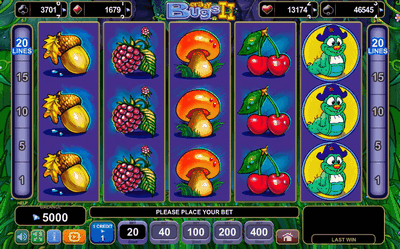 Crazy Bugs II comes from a developer known as EGT online, though its full name is Euro Games Technology. The game is offered already at land-based casinos, and now the online casinos will have it as well.
For Crazy Bugs II, the layout that was chosen involves the use of 5 reels of 3 symbols, plus 20 active lines for combinations to form on. The features consist of scatters, wilds, multipliers, free spins and bonus games, which looks like a pretty good mix to have access to.

The game will require the player to cover all its lines, so there will be 20 coins used by the bet, at a minimum. The bet can only go up from there, and in the typical EGT slot the line bet can often reach 20 coins, with up to 400 coins total.

A prize in Crazy Bugs II can look good, but it’s not going to rely solely on what a regular combo can offer. There are multipliers involved inside that can double the wins of regular combinations, during free spins they can even go higher than that.

The combinations that you form in this slot will have their symbols start from the leftmost position of an active line, continuing towards the right side on adjacent positions. The scatters are the only ones that are excluded from this.

To start with, the wild symbol will be among the features that you will get access to, as a player of Crazy Bugs II. The role of these symbols is to act as Jokers and to have you form more combinations, so it gets you paid more in the long run. In this case, it goes further and it even doubles the value of the prizes that are formed with its help, so it has a multiplier to offer you.

Moving on to the scatters, those will be responsible for triggering a special feature and to offer you a decent cash prize. Once again, you will need a minimum of three scatter symbols to get this feature started.

The third feature is offered through the bonus symbol. This is needed in at least three positions at the same time, and the game will offer in exchange a feature, one called Cricket’s Party mini game. In this particular feature, the player gets free spins and a chance to win a lot of cash without having to pay for every single round.

The theme of Crazy Bugs II is a very sweet one, and I enjoyed playing the slot machine thanks to it. Inside, you will discover a cartoon style design whose symbols are split between the various small insects and critters that you might find in the grass and the fruits of the forest that they might be enjoying. The characters look funny to me, which is a plus for the game as far as I’m concerned, since it makes it easier to play. The symbols give us bees, ants, snails, worms and various other bugs, and they’re typically dressed up as characters (queens, musketeers, pirates, etc). Other symbols selected for the lower paying symbols get images of berries, cherries, toadstools and acorns.

Crazy Bugs II has managed to offer a very good design and even an interesting theme, while the mix of features is going to give you plenty to enjoy. Overall, it’s a pretty good game, better than most offered by EGT anyway.