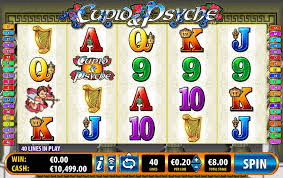 Try Cupid & Psyche developed by Bally. It is 5 reels 4 rows 40 lines video slot game that takes you to the Ancient Greece with its atmosphere of the myths. Gameplay Make your bet from 1 cent to 10 Euros and let the game begin. The goal is to get winning combination by spinning the reels. But as usual here are some extra features that are present in all Bally games. Common Wild Symbol represented by the picture of Psyche here substitutes any symbol in the game, but Bullseye Symbol. If three or more Bullseye Symbols are scattered you will be awarded bonus game with free spins. During the free game you are also able to collect Bullseye Symbols that bring you one more surprising feature! The essence of this feature is following − if you collect certain amount of Bullseye Symbols the reels become wild (you will see column with word “WILD” on the reel) and will be substitute for all symbol except Bullseye Symbol till the end of the bonus game. If you collect 16 Bullseye Symbols while playing bonus game you will get reels 5, 4, 3 and 2 wild! Review Harps and logo of the game, Cupid and Psyche, Aces, Kings, Queens, Jacks, Tens and Nines gleam among the columns of Greek temple on the reels of Fortune. Pretty animation of symbols when winning combinations occur and nice music playing while the reels spin and when you win make the game really worth playing. So check it out at SlotsUp. We also have good news for the ones who want to play mobile slots for fun on phone or tablet. Cupid & Psyche has mobile version, so you can play it anywhere!