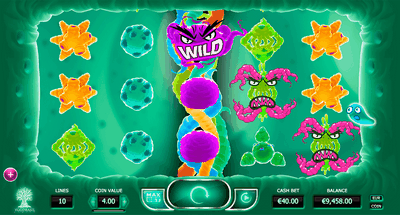 You normally know where you are with online casino developer, Yggdrasil Gaming. The software maker produces lots of popular online slots packed with HD sound, slick 3D graphics, and genuinely interesting bonus features.
You don’t normally get bog-standard free spins or Pick ‘em bonuses with Yggdrasil. Indeed, in some games, like Chibeasties 2 and Double Dragons, gamblers can find some nice bonus rounds to go with their slick base games. Others, meanwhile, like Cyrus the Virus, keep it nice and simple. Not all slots players want massive variance, you know.

If you’re fed up with 25-payline online slot games packed with volatility, you might enjoy the simpler charms of this 5-payline monster. Let’s review and have a closer look.

The Cyrus The Virus casino app is played across 5 paylines, with coins ranging from 0. The max bet of 40. The game also features a handy Autoplay function (10-1000 spins).

Yggdrasil always seem to pull out the stops when it comes to music. For this game they appear to have hired Jean Michel Jarre – at least, the electro pop sounds coming from the reels sound like they originated in 1980s France.

There are seven regular icons in Cyrus the Virus, with payouts starting at 10 coins. As the name suggests, the icons all represent bacteria or viruses which have been given evil-looking eyes and mouths.

The high limit symbols are a bit more generous. The orange bug pays 30-300 coins, the red bacteria 40-400 coins. The top jackpot is reserved for the ghastly blue germ (presumably Cyrus himself) who dishes out 2000 coins if you land 5OAK.

As the gambler spins the reel, you’ll notice that Reel 3 is given a little more attention than other reels. In fact, it’s often the last one to come to a stop. There’s good reason for this: Cyrus the Virus has a Wild symbol that will ONLY appear on Reel 3. If it lands on the centre reel it will expand to fill the whole reel. In addition, one re-spin is triggered for players.

Like this Yggdrasil game, Starburst features just a few paylines and lots of stacked gem icons that can line up for big wins. The paylines run both right-to-left and left-to-right for 10 in total. The ‘Starburst Wilds’ appear on Reels 2, 3 and 4 and will expand to fill the whole reel when they appear. Oh, and a re-spin is triggered automatically too. That’s about it for bonus rounds, but with the re-spin lots of extra real cash can be added to your roll quite easily.

Give the Free Cyrus The Virus Slot a Try

If you’re new to Yggdrasil, there are probably better online slots than this to try out. And if you are after minimal paylines with the chance of a re-spin, Starburst is a better bet all round. In fact, so successful has Starburst been that other developers have tried to emulate it.

But if you’re interested in checking out a bit more about Yggdrasil, give the game a play for free today.