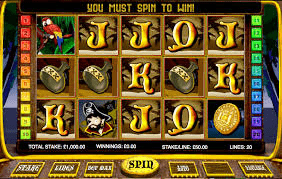 OpenBet’s Dead Man’s Chest Jackpot is a prize that can be won on the 5-reel, 9 payline slot machine of the same name. There is also a 3-reel classic styled slot version of the same game, and if available, it has its own separate progressive jackpot. Although very basic in what it offers, the game does contain a large cash prize for punters who hit the game’s best winning combination.

In all honesty, if you are not playing this game for the jackpot there is little reason to even try your luck at it. This game looks incredibly rough in the graphics department, and the only bonus feature to speak of is awarded if you manage to land three of more pirate chests. This game is just incredibly dull overall, and basic even when compared to other simple video slots, which aren’t exactly known for their interactive features.

With that being said, Dead Man’s Chest does offer a huge cash jackpot, which is won when players hit five of the jackpot symbols on the game’s nine paylines. There really isn’t much to the rules of this game, as it is one of the more basic progressive jackpot games that we have ever seen. If you are a scallywag looking to bring home a bunch of booty by testing your luck, Dead Man’s Chest may be the game to help you win a chest full of loot, otherwise give it a miss.