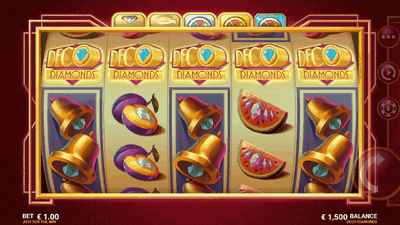 Deco Diamonds mobile slot is a collaboration between the mighty Microgaming, one of the leading players in the online slots world, and Just For The Win, a Swedish gaming company. Just For The Win (JFTW) is a relatively new name in the genre, having only formed their studio as recently as 2016, with their first titles being rolled out the following year.

They may be a new company, but with a talented team of creatives and developers already on board, they’re already making waves. And when it comes to launching a new online slot Microgaming has the knowledge and reach to ensure that it’s successful. So it’s hardly surprising that the two companies worked in collaboration, with Microgaming offering JFTW their Quickfire platform for the Deco Diamonds slot review developers, enabling the game to load quickly and seamlessly across all platforms and devices.

The game has been designed and created using HTML5, ensuring that it displays quickly and efficiently across all devices and platforms. So whether you choose to play on a small or large screen, you’ll have the same great experience when playing Deco Diamonds on your desktop as you can expect when you play the game on your mobile and tablet.

Art Deco is tricky to pull off, as it relies on the skills of the graphic artists and designers to create the necessary details. But we’re delighted to report that Deco Diamonds more than fulfils its brief, bringing a genuine touch of 1930s glamour to the reels of this stunning online slots game.

Travelling back in time to the 1930s means choosing symbols that resonate with the style of this era. The game’s designers have managed to produce a game with a retro feel and yet given it a modern twist at the same time, which results in a game that’s extremely easy on the eye.

The colours, typography and styling of the game all conform to the Art Deco theme, and it’s easy to see how much time and effort has gone into the game’s design. From the opening screenshots, featuring a dark red background with the game’s logo picked out in the iconic lettering of this period, the player is left in absolutely no doubt that this is game fit for a high-roller as well as the casual player.

Once the game has finished loading, which takes barely any time at all, the player is presented with the reels themselves. Once again, no element has been left to chance, and the game’s creators have worked overtime to ensure that every single aspect of the game conforms to the ideals of the Art Deco movement. So you’ll find interesting geometric shapes around the playing area, which is set against a muted red background for maximum visual impact.

The reels themselves conform to a fairly standard layout of five reels, each featuring three rows of symbols. The way that they are depicted is quite unusual, though, as the playing area has been designed to resemble a three-dimensional rolling machine, which helps to draw you into the game.

On the reels you’ll find an array of old-fashioned symbols from the days of fruit machines. These include cherries, plums, lemons and watermelon slices, all depicted in glorious colour with minute attention to detail. The stylised elements of 1930 graphic design are in evidence wherever you look, and nowhere more so than in the highly detailed number 7 symbols, which appear to have been crafted from solid bars of gold and studded with valuable diamonds.

Quite often, the soundtrack of an online slots game can let it down quite badly, quickly becoming an annoyance – which is perhaps why all games have the option of toggling the sounds off – but in this game the music is an absolute delight, consisting of jazzy melodies that bring to mind the crowded bar of a speakeasy club.

How to Play Deco Diamonds

Most online slots games have a player console just underneath the reels, but in Deco Diamonds bonus�s designers clearly felt that this would interfere with the slick lines of their Art Deco theme. So the controls aren’t immediately obvious.

The Spin button is the most important part of any online slots game, and here it’s tucked away to the right-hand side of the reels, level with the third row of symbols. Click or tap on the large circular outline of the button, and the reels will spin, landing randomly, but hopefully bringing a cash prize in their wake!

Of course, playing Deco Diamonds in Free Play mode means that no cash is banked, so your balance is virtual, as are any wins or losses that you incur. This is a great way of getting to grips with a game that you haven’t played before, as you have the chance to explore all aspects of the game to your heart’s content before committing any actual money on a wager.

In fact, we recommend that all players, whether complete newbies or seasoned high-rollers, should take the time to try out a new game in Free Play mode first, preferably for around 500 spins or more. By changing the betting parameters you can see for yourself how your wins and losses will pan out over a period of gaming, which can help to inform your wagering strategy if you decide to play for real money at one of our partner casino sites.

But for now, you need to decide on the value of your virtual coin for each spin of the reels. Your betting selection can be accessed by clicking or tapping on the round icon above the Spin button, level with the top row of symbols. This will bring up a carousel of options, which you move through by clicking or tapping on the arrow buttons above and below the carousel. Your options range from a modest 10p per spin up to a maximum of £50. This is an excellent range of options, meaning that cautious players can enjoy the game every bit as much as high-rollers.

There’s another button just above your Bet Selection which opens out further options for customising the gameplay to your liking. Here you can toggle the sound on and off, access further features such as Quick Spin and access the game’s paytable and rules. Further information about the game can also be accessed by clicking on the small blue ‘?

Depending on the symbols, you need to match at least either two or three from left to right across a payline to achieve a win.

Most online slots game include Wilds and Scatters, which add to the fun, increase the player’s chances of scooping an attractive win and trigger extra bonus features. In Deco Diamonds, there are two Wilds, one which says Deco Diamonds and the other saying Wild Diamonds. These can substitute for any other symbols on the reels and can help you to achieve winning lines where you lack sufficient numbers of matching symbols to do so.

The logo symbols can pay out whenever two or more of them appear on a payline. Matching two Deco Diamond symbols on a payline will reward you with a modest 1x your bet, but if you’re lucky enough to attain five on a payline you’ll benefit from an extremely generous 1.

The Scatter in an online slots game usually triggers a Bonus Feature round, but in Deco Diamonds the twin Wilds make this redundant. However, the Deco Diamonds symbol performs a similar function to a Scatter, as three or more of the game’s logo trigger the Bonus Wheel round.

The Deco Diamonds symbols are the key to the game’s biggest payouts. Whenever two or more of them appear on the reels – and they don’t have to be on paylines – they will trigger an automatic Respin. You will receive one Free Spin, with the potential to trigger further Respins as you go.

When three or more Deco Diamond symbols appear across the reels, the Bonus Wheel will appear. There are three separate levels to this round, so you can expect to receive the silver, gold or diamond level if you attain three, four or five symbols. If you land on one of the lower levels, you still have the potential to move up if the wheel’s pointer hits the ‘Level Up’ indicator.

Deco Diamonds offers a Return To Player, or RTP, or 96. This doesn’t mean that you’ll automatically receive back that percentage of your total spending on the game, though, so don’t be misled by the term. What it does mean is that for every £100 spent overall on the game, by numerous players, a total of £96. Of course, in practice this means that some players can expect to receive some Big Wins, and even Mega Wins, whilst others will fail to make any return at all on their spending.

Deco Diamonds is also a high-volatility slots game, which makes it ideal for high-rollers chasing a major win. This means that the game doesn’t pay out as frequently as some other games, but when it does, the payouts are much larger than games that offer more frequent wins. This means that you are strongly advised to experiment with wagering strategies in Free Play mode for as long as possible before wagering real money so that you can assess the gameplay for yourself before parting with any real money.

If you love Deco Diamonds, then we’ve searched through our catalogue of titles to find some other great online slots games that we think you’ll also enjoy. With so many titles on offer, we’re convinced that we have something for absolutely everyone, so whether you love winning free spins or you’re looking for a game that offers that elusive ‘something extra’, we’re confident that we can uncover your perfect game.

A huge hit with lovers of online slots games around the world, Da Vinci Diamonds slots takes you even further back in time to the era of the great Da Vinci himself. Artist, sculptor and inventor, Da Vinci was years ahead of his time, but today he is best remembered for his iconic works of art. These are celebrated to the full in this immersive game, which features Bonus Free Spins and Tumbling Reels.

There’s a reason why Starburst is one of the best-known online slots games around the world, and it’s down to the game’s exceptional playability. Its array of diamonds and jewels in an out-of-this-world setting can keep players returning to this popular title from NetEnt.

With 10 paylines and Win Both Ways for extra chances to scoop a major prize, Starburst also features Expanding Wilds, Respins and Free Spins. And with a relaxing ambient soundtrack, this is a game that we’re sure you’ll want to return to again and again.

Disclaimer: Deco Diamonds trademark / license is owned by Microgaming, Just For The Win.