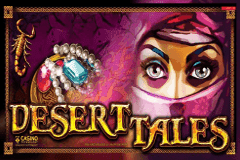 Far across the desert sands…

The layout and setup in Desert Tales bonus are quite basic and don’t stray from the industry standards. This means you will be looking at the common grid of 5 reels and 3 rows. In addition, there are only 10 paylines in total, which has pretty much become custom for this developer. You won’t be able to adjust that number, however. And you won’t really need to either, as the stakes here start fairly low. The betting range at your disposal spans from 10c per spin up to the maximum of per single spin. And as for the symbols, they include the lower value playing card icons. Each seems to be drawn on the cracked desert land in a different color. The symbols here include A, K, Q, J, 10 and 9. Following them, we have two creatures of the night and inhabitants of the desert: a lizard and a scorpion.

And after that, there’s a tray with a pot and two cups of refreshing tea. Finally, we have the two character symbols – one male, the other – female. These are both of the same value and are the second most lucrative symbol after the game’s Wild. The Wild, in turn, pictures the silhouette of a camel against the setting sun. Aside from being the highest paying symbol, it can also replace any of the other icons in the game. Furthermore, it will also double the payouts for any winning combination in takes part in. The only symbol the Wild cannot replace, though, is the Scatter.

Special features and other extras

Be on the special lookout for the Scatter symbol we mentioned. It depicts a treasure chest, wide open to reveal riches and valuables of various kinds. This isn’t by far the highest paying symbol on these reels, but it’s still quite valuable anyway. Just like the Wild and pretty much any other symbol here, the Scatter can appear in any position, on any of the 5 reels. But your goal will be to land at least 3 of these symbols at the same time, during the same spin. That way you will trigger the freespins bonus feature and receive a total of 15 freespins. Furthermore, all freespins winnings will also be subject to a 3x multiplier, which is even better. Note, however, that this does not apply to the Wild symbol wins. In addition, you can also retrigger the feature and receive another 15 freespins, for an all in all total of 30 freespins. All you have to do is again land another 3, 4 or 5 Scatter symbols anywhere in sight.

Last but not least, Desert Tales online slot also boasts its very own gamble feature, which grants players the opportunity to increase their payouts whenever they want to. The only requirement is that you win less that 10x your total stake during a given spin. This will enable the Double Up mode, which you can choose to select if you feel like you can increase your prize. A new screen will show you a simple side game, where you need to guess the color of the playing card. Alternatively, you can try guessing the suit of the card as well, which can be even more rewarding. A correct guess will double your amount (or quadruple it) and you can move on to a further attempt. You are also free to collect your prize at any point and resume the base game. But if you guess incorrectly, you will lose your whole prize.

Other games that resemble Desert Tales

Desert Tales online has plenty to offer and can prove fairly rewarding. But perhaps you would like to try something different that can offer a similar gaming experience? Well in that, Casino Technology has a newer and visually more enhanced slot in store. Combat Romance will provide you with a near identical setup and gameplay. True, the theme is quite different and has nothing to do with deserts and such. But the graphics are far better and you will again get to benefit from multipliers from the Wild and during the 15 up to 30 freespins. Furthermore, the Double Up mode will be there, as usual.