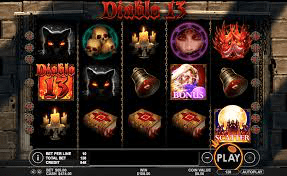 Diablo 13 slot review is your basic devil and bad luck themed game, featuring everything from skulls, to black cats, demons and devils. It’s just an overall dark looking game, with a gothic design and all the other features that I’ve mentioned. It’s a theme that I’ve seen other developers go with before, so it’s nothing unusual on that front. Pragmatic Play, which is the developer behind this slot machine, has included in it a total of 13 lines, staying true to the game’s theme. The layout is the regular one though, with 5×3 symbols. Another place where I welcomed the 13 number is in the jackpot, where you get paid up to 13,000x. The features offered in Diablo 13 include a wild symbol, a scatter that gets you 13 free spins, plus a bonus game that can pay quite well.

Games from this developer have very similar betting systems. In each case, including here, the number of lines is fixed. The line bet can get to a maximum value of , while for 13 lines the total bet can go to .

Diablo 13 slot games has a gothic look and a devil and hell inspired theme. You’re getting a pretty simple slot machine theme wise, with things that you’d consider hellish appearing on the reels. The surrounding area is made out of stone, with metal chains hanging from the sides. The design style is not a great one, for me at least, but it’s not going to be a problem either, if you like everything else about the game. It’s just the kind of game that I’d consider average graphics wise. If you look at the symbols that the reels give you, you start off with a logo, a wizard and a castle for the features, and then we have the regulars which give us candles, bells, a book, a black cat, skulls, a woman’s red eyes, demons and a devil.

The features offered by Diablo 13 casino app feel pretty regular, nothing really surprising among them. I did like that they included all three types of features that games tend to have, so you have bonus games, free spins, and wilds all present. For the wild symbol, Pragmatic Play chose the game’s logo, the one showing us the Diablo 13 title, in red and with fire behind it. You use these wild symbols to trigger combinations, using matching symbols as a model. The wild will substitute for whatever regular symbol is required to appear in its position, and you end up getting paid thanks to it. It doesn’t replace scatter or bonus symbols, but that much is true about it in 99% of the games. We’re getting a limited scatter symbol here as well, one that shows us a castle of some kind, under a full moon. The scatters only appear on three reels, and you need them all present to trigger free spins. The three reels in question are the ones from columns 1, 3 and 5. The number of free spins is predictable, a total of 13 rounds being offered. The Sorcerer is another symbol, the one that triggers the bonus game, and also the choice that probably makes the least amount of sense in this case. I’m not sure what the connection is between the sorcerer and the devil, but having a minimum of three bonus symbols on an active line will get you into a bonus game. The number of triggering symbols determines the kind of range that you have for the prize. For the maximum number of bonus symbols, 5, you can get rewards between 450x and 2,250x. It’s a simple feature, where you pick one of the two dungeons, and you get a prize from it.

Diablo 13 has a thing for the number 13, and lucky for us it extends to the top jackpot that it can offer. It will go up to 13,000x, which could mean ,000 cash in this particular case. Don’t get me wrong though, this is the only big prize offered in a regular combo, the others being at 1,000x or lower. With an average RTP which is reported to be anywhere between 90.

Diablo 13 can give a player a pretty good set of features, and even very high top payouts, but if you look at the kind of average Return to Player numbers it has, it stops looking like an appealing choice. Its graphics are only about average, so enough to keep you playing if everything else is great. It’s not the case here though.