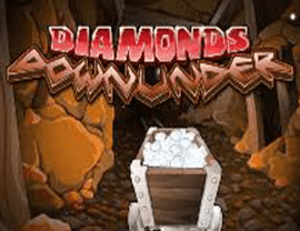 Despite its name suggest the game deals with Diamonds (but of course there is Diamond symbol here) but the slot has Aussie theme with very symbolic figures in play like Crocodile Dundee, koala, boomerang, kangaroo, crocodile. These symbols are likeable but the graphics of them are not too well-made and I also think it would have been better if the background of reel area wouldn’t be transparent because it has brown colour and seems a little bit dominates the screen taking away the attention from figures in front of it but it’s not a big problem at all, not ruin the appearance so eventually it has a solid view.
Pickaxe symbols are the components of the best 5 of a kind line which pays 5000 times of line bet but the second highest paying combination rewards with only x500, so I think there’s a big gap between them. The Pickaxe is also the Wild here but can’t multiply win when it’s replacing. Free spins can be won in numbers of 10, 20 or even 100 while all wins are tripled. As its kind, this feature can be the most awarding part of the game and the added multiplier is really important participant here but I noticed when I got 20 free spins instead of 10 the winning combinations and the Wilds also showed the trend to not appear that frequently as they did in the normal games or even when just 10 extra games were awarded. It’s a totally whimsical feature as sometimes it can be real great and has giving attitude but other times it doesn’t pay back even my total stake. Of course can be said ‘Yes, that’s how a gambling product works but I think it’s better when player can predict with good chance at least the minimum standard count it as some kind of guaranteed prize. No matter how poor getting 20 games comparing it to 10 but I like to have just once such 100 extra spins when I could sit back and my only task would be to count the won credits (or be in rage because they’re not coming).

Anyway, the slot offers a little diamond mining bonus game where we have to choose 3 spots to where to dig and their cumulative credits are multiplied by total stake. In my opinion it’s neither a too exciting, entertaining nor profitable side game so this is really not an overall good extra feature.

Unfortunately, this can be said about the whole game. I don’t feel this slot would have the ability to keep players entertained for long time and doesn’t have that quality of features that could raise the excitement factor so Diamond Downunder is a very mediocre product with limited capability to be a good game.