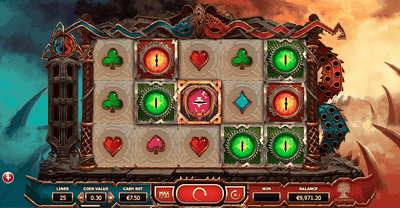 Game of Thrones Meets Dungeons and Dragons
Yggdrasil Gaming has shocked the world with a variety of amazing look games. Double Dragons slot review keeps this trend in full flow, as the UI used takes players away to a true fantasy world. Reminiscent of Game of Thrones, the sheer level of detail here is astounding. The game is split between the red dragon side and the blue dragon side, with each having its own design style.

Massive in scope and mystical in approach, Double Dragons is a game that will transport you into a world of Dungeons and Dragons like fantasy.

What helps to make this game so amazingly atmospheric is the symbols used, as they all carry a very impressive appearance that ties into the game. The low value symbols here all carry a fresh looking shine, as the classic card deck suites represent them. However, it’s the high value symbols that really do steal the show, as they are represented by the mysterious looking dragon’s eye.

If you’ve played a Yggdrasil Gaming title in the past, the gameplay elements within Double Dragons slot will be extremely familiar from the outset. Via 25 paylines and 5 reels, the game does have a few tricks and twists to offer. The most valuable symbols in this game are the 4 dragon eyes mentioned above, with attention grabbing green, blue, orange, and purple symbols being linked to the biggest payouts.

Looking at the betting scale with Double Dragons, once again it’s fairly standard fare on the grand scheme things. The minimum bet to cover all paylines in this game is 0.

What is quickly going to separate Double Dragons from other Yggdrasil Gaming releases is the loaded array of bonus elements it has. First up, there is the Dropdown Win feature, which causes winning symbols to vanish when in an active combination. When this happens new symbols fall into the game, giving you a chance to win all over gain.

If you’re fortunate enough to rack up 4 back to back wins, you’ll be able to unlock the Double Dragon special feature, which throws two highstack wilds into the game. This means that your chances of winning here shoot through the roof. It should be noted that the game also makes use of a Dragons Head bonus feature, which certainly works to stir things up a bit.

In this medium to high variance game, the controls are pretty self-explanatory. At the bottom of the screen there is an appropriately designed panel that features a clear selection of buttons. Through this any player, both experienced and otherwise, can get to grips with Double Dragons bonus in no time at all.

Double Dragons and Double the Fun!

Yggdrasil Gaming has done it again, as with its latest game it has come up with something incredibly special. Double Dragons is a game that really does push the boundaries of what a real money slots game can do visually, as this title can easily rival some of the mobile video games currently on the market.

Hitting the high notes and bringing players an unrivalled taste of fantasy, Double Dragons is a game that you really have to play sooner rather than later!