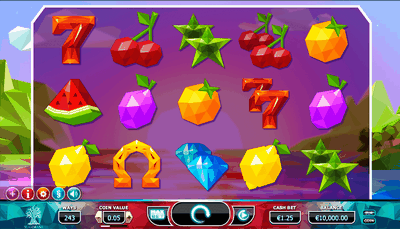 It doesn’t make much sense why fruits were selected to be part of the classic slot look but over the many years of their existence it has grown to be so. This slot takes complete charge of this fact by cramming their reels full of delectable fruit for players to make wins off. This is coupled with the sharper, more modern electronic music that rattles on in the background to make this a one of a kind slot. Doubles slot review fundamentally a 5 reel and 243 ways to win slot, so the wins are scored by aligning symbols from left to right. Add this to the doubling up aspect of the game where symbols can appear in pairs and players can hit some rather wicked combinations. There is also a free spins feature to this slot that can award up 40 free spins and even select a symbol to double up.
Yggdrasil Gaming’s Doubles Slot Appearance and Gameplay

There are some rather interesting aspects to the theme that Yggdrasil gaming have created here. Firstly, despite the older, classic symbols on the reels, the graphics and design all convey a more modern look. With the electro sound effects and a crystal like appearance to the fruit symbols this slot makes for an interesting combination of slot history and future.

Players will find several different symbols on Doubles mobile slot reels. These include of course a range of fruits like lemons, oranges, cherries and melons. There are also the other classic symbols like 7’s and horseshoes. The highest paying symbol is the Diamond, and can net quite a bit if hit in combination, especially with the doubling possibilities. On the 5 reels with 243 ways to win these symbols can be quite lucrative so a mindful eye on the higher scoring ones is crucial.

As far as online betting goes, there is the choice of coin denomination that is rather broad, given that there are no pay lines to adjust this is definitely necessary. However the point of Doubles slot is turning smaller bets and smaller wins into large combinations and therefore large wins.

The way the doubling up works in this slot is that randomly during the base game certain symbols will appear as doubles and therefore count as 2 in a combination. This means that where a normal 5 reel slot will have combinations up to 5 for each symbol, Doubles slot enables up to 10 in a combination which understandably rewards some rather ridiculous jackpots. At 10 in a combination, Diamonds pay out 25 000 coins, which is not bad for a fun fruity slot.

The free spins in Doubles slot are triggered by the free spins bonus symbol, which makes complete sense. This cool symbol awards 10 free spins for 3 on the reels, 20 for 4 and an impressive 40 if 5 happen to appear. During this feature players can pick a non bonus symbol to appear doubled the entire free spins. That’s kind of amazing and allows players a choice of picking the lower, more likely symbols for a safer, less lucrative round, or go for that Diamond symbol and the 25 000 coins. Again it’s the player’s choice. Check this site, the free spins can also be retriggered during this bonus feature.