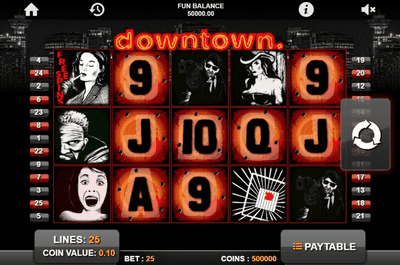 If first impressions are to go on, you can’t help but be impressed with this slot by 1×2. It opens with a dark skyline scene, the camera scanning across the tops of buildings, lightning framing the sky and you are drawn in immediately – the feel of the intro much like the film ‘Sin City’. Entering the slot itself tells you more of the story – here you’re dealing the with criminal underworld featuring a gunman, a thug, a screaming lady and a lady from the red light district, drawing more comparisons to the film.

Graphically this slot is very striking. The same skyline from the intro sets the backdrop to the slot, while the reels themselves are a bold mix of black and red. All of the characters are drawn in black and white, with a splattering of red across all of the other symbols – on many occasions indicating blood. You’ll find playing card symbols here, all framed in front of a target which has been riddled by bullet holes. All the time when playing, you’re treated to a nicely atmospheric background sound interspersed with the wailing of police sirens. This slot has two distinct features. The first is the free spins round and the other involves you shooting at a series of high rise buildings.

Set up and Play for Downtown Slot

Behind the guns, bad guys and the beautiful ladies, this slot is a standard 5 reel slot – this one featuring 25 win lines. You’ll have the option of choosing your strategy and playing as many or as few of these win lines as you’d like and after choosing your coin amount and the stake per line, you’ll have your total stake for each spin. You’ll achieve a win when landing just two of the characters in a row, while you’ll need to land 3 in a row of the playing card symbols (all wins paid when landing these symbols consecutively on a win line from left to right).

The street lady is the top paying symbol, winning you 750x your coin amount when landing 5 in a row, the gunman coming next at 500x. The screaming lady and the thug pay 300x and 100x respectively, with the playing card symbols from 9 to Ace being the lowest paying of all.

Options available when playing include the auto bet, where the slot will play without interruption for up to 100 spins and the ‘show win lines’ button which overlays every line on top of the slot.

The yellow ‘Police Line – Do Not Cross’ symbol acts as the wild in the game and will substitute for any other symbol in the game.

The two features at this slot by 1×2 are activated by scatter symbols. The free spins symbol is a mysterious man in glasses and you’ll need to land this three or more times on a win line to activate the free spins round. The bonus round is activated when landing the blood spattered cell symbol three or more times on the reels – this acting more like a traditional scatter symbol than the free spins one. If you want to find out more about how slots work, read our guide here.

The number of free spins you receive at this slot is dependent on how many of the crystal ball symbol you land to activate the feature. Land just three and you’ve got 5 free spins, but land four or five and you’ll receive 15/25 free spins. During the free spins round another symbol is introduced – the Lamp. This is another scatter symbol which works in the same as the free spins scatter. Land this 2 or more times during any free spin and you’ll gain a win. If the symbol appears the maximum five times you’ll win 200x your coin amount.

The bonus round sees you taken away from the slot completely to a screen showing a series of five buildings in the distance. You’ll shoot at each one and potentially be awarded a cash prize for each one you shoot – I say potentially because on occasions shooting a building will win you nothing. At the end of the round all of the wins will be totalled, giving you an overall winning amount for the feature.

This is one of the best slots produced by 1×2. The dark theme really draws you in, the accompanying soundtrack only improving the experience. No, you’ll not be able to win a Jackpot amount when playing here, but from a gameplay experience it’s good. The features are somewhat standard and not quite as wide ranging as found at some other slots, but this might be an advantage to the player who prefers their slots without too many interruptions. This slot is a visual treat!