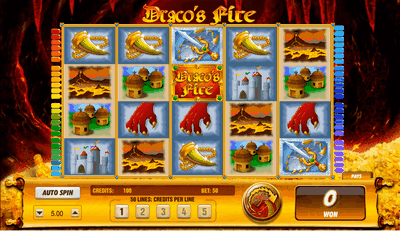 Draco’s Fire is a 5 reel game, a Slot with 50 lines on it, which has a top prize of ,250, and it was designed by amaya. The game gives the player the option to use features like the bonus symbol, the wild, a scatter and to get free spins while doing so.

Those of you that have watched The Hobbit know exactly what they’re getting from Draco’s Fire. While it doesn’t aim to replicate that book, Draco’s Fire does focus on a fire breathing dragon that has a treasure in a cavern, so it takes at least a bit of inspiration from it. The cavern with all its riches can be seen right behind the reels actually. At the bottom of the screen, you will find the game options, only they’ve been placed on a type of paper scroll. The symbols which the player will find on the reels include the head of Draco the dragon as the bonus symbol, the full body of Draco as the wild, Draco on top of his treasure as a scatter, and then we go on to the regular symbols including the top jackpot symbol which is the game logo, the sword, Draco’s claw, the drinking cup, the castle, the volcano and the peasant huts.

Wagers placed on the 50 lines of Draco’s Fire use up to 5 coins for each one, with values between . The maximum bet in this case becomes a 250 coin bet, worth up to ,250. The game jackpot is somewhat low, when you consider the bet, giving the player back ,250 at most.

The first of the feature symbols of the slot is the wild, the one that substitutes for other symbols, and when it appears on reels 2 and 4 it triggers the Flaming, which pays up to 6x per payline.

The second feature is the scatter symbol, which gives away 10 spins for free, plus a prize which is double the bet, when the game has these symbols on the reels 1, 3 and 5. With a bit of luck, the player can also retrigger this feature.

The final feature of the slot is the bonus symbol, the one that will trigger 4 spins for free, but for that to happen the entire 3rd reel needs to be filled with four Bonus symbols. It acts as a wild during these Free Spins, and at the end it changes into regular symbols.

It’s a game that does things a bit differently than we’re used to, and that can be a good thing. I’ll let you decide if you like it, by trying it for yourself.